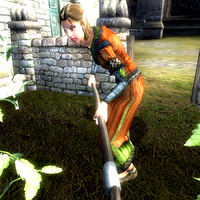 Hasathil working outside her Anvil home

Hasathil is a Bosmer commoner, and the wife of Heinrich Oaken-Hull, captain of the Serpent's Wake, currently docked in Anvil.

With her husband at sea nine months out of ten, Hasathil claims that the Nine console her; incidentally, she receives additional consolation from her secret lover, the apprentice of Varel Morvayn, Enilroth. After waking up at 6am Hasathil starts the day with two hours on the ground floor, then ventures down to the Chapel of Dibella for four hours in silent prayer. At noon, provided the weather is good, she will spend four hours working in the small garden behind the house; if it is raining she will just stay indoors. At 4pm, regardless of weather, Hasathil leaves Anvil for her daily encounter with Enilroth behind the Horse Whisperer Stables. She returns home to her unsuspecting husband at 8pm and eats a two-hour dinner before her bedtime at 10pm. When the Knights of the Nine plug-in is installed, Hasathil will change her behavior slightly. Instead of going to the Chapel at 8am, she will instead listen to The Prophet for four hours. After Knights of the Nine is completed, she will return to her usual routine.

She wears a russet felt outfit with matching shoes. She carries the key to her home, a moderate sum of gold and a hoe.

When you first speak with Hasathil, she will introduce herself: "I'm Hasathil, Heinrich Oaken-Hull's wife." If you ask her about Anvil, she will lament about being a sailor's wife: "The life of a sailor's wife isn't an easy one. Heinrich is at sea nine months out of ten. But Anvil's a friendly town, and the Nine console me."

Hasathil is subject to a lot of prejudice concerning racial differences between her and her husband. Sometimes, when you ask citizens of Anvil about rumors, they will reply: "Heinrich Oaken-Hull is married to a Bosmer? I suppose the women are less annoying than the men." or "The shipmaster, Heinrich Oaken-Hull, has a wood elf for a wife. I'd rather sleep with my horse." Others will reply: "You don't see a lot of Human-Bosmer marriages. I don't know if it's even legal in Cyrodiil." and "I don't know what would possess him to do that. Marrying a Bosmer is just wrong."