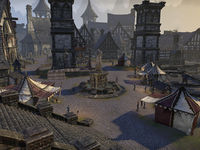 Wayrest circa 2E 582
Ficheiro:Highrock.jpg
The location of Wayrest

One feels that one is in a modern city when one visits Wayrest, but there is a magic in the air that could only come from centuries of civilization. — Sathryr Longleat, Wayrest, Jewel of the Bay

Wayrest is a major city in the center of the Stormhaven region of High Rock, at the mouth of the Bjoulsae River. It serves as the capital of a kingdom that forms one of High Rock's provinces.

The city is split into seven districts. In the northern part of the city lies the Residential District. West of the river and south of the Residential District lie the Merchant District and Market Square. In the west are the Temple and Palace Districts, while in the east, the Banking District can be found. To the south, on the banks of Iliac Bay, sit Wayrest Docks.

Wayrest has always been seen as a rival to Daggerfall, which was already well established when it first was founded as a sleepy fishing village at the mouth of the Bjoulsae River. Wayrest prospered greatly after the Fall of Orsinium in 1E 980 when the commerce of all of Tamriel began to pass through its gates. Today the city can boast the largest and richest population in High Rock.[1]

In 2E 541, the city was besieged by a horde of Reachmen, led by Durcorach the Black Drake, for fifty-seven days. After the Reachmen were defeated, Wayrest, along with Daggerfall, Shornhelm, Evermore and Camlorn, signed the first Daggerfall Covenant.[2] During the Ranser's War in 2E 566 - 2E 567, Wayrest was besieged again, this time by the forces of King Ranser of Shornhelm. His army stood firm, but after the other kingdoms of the Covenant and the Redguard sailors from Hammerfell came to Wayrest's aid, Ranser and his troops were forced to retreat back to Shornhelm.[3] After Ranser's defeat, the second Covenant was formed, with the city of Wayrest as its capital.[4]

In 4E 188, Wayrest was captured by corsairs, who also raided and destroyed the Dark Brotherhood Sanctuary located there.[5]