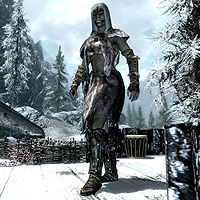 Yatul is an Orc ranger of Narzulbur, the Orc stronghold of Eastmarch. She is an aunt to the tribe's Chieftain, Mauhulakh. Her relationship with Mauhulakh has raised suspicions with his son, Dushnamub, while his daughter, Urog, is oblivious. Her conversations with Bolar strongly suggest that they are responsible for the deaths of Mauhulakh's wives.

Yatul is the only member of the tribe to be active all day long. She patrols the walls of the stronghold without rest and never actually enters the longhouse.

Yatul wears a hat, gloves, leather boots, and some fur armor. She carries a collection of lower class loot and gold, a leveled war axe, bow, and 20 arrows, all of which can be up to Orcish in quality.

She will often talk about her nephew, saying things like: "Mauhulakh. He wants to be a leader, but spends too much time moping over women. Bolar and I should be all he needs.", "Orc chiefs should be strong and stand alone. They need no companions. Progeny is a poor excuse." and "I know I sound abrasive. It's just that I love Mauhulakh so much that I want us to be happy together."

She can often be seen conversing with other Orcs in the stronghold:

Yatul: "I hear Mauhulakh is wandering again. He's after a new woman."
Bolar: "He's lonely. What do you expect?"
Yatul: "No matter. You'll take care of things like you always have."
Bolar: "Please, let's not have it come to that."
Yatul: "True... we could simply make sure she never reaches Narzulbur."
Bolar: "That wasn't what I meant."

Yatul: "If he does show up with a bride, we'll have to move quickly."
Bolar: "Once she's with child, I will not harm her."
Yatul: "Yes, you've made that quite clear in the past. And now we have Urog and Dushnamub because of your weakness."
Bolar: "They are good, loyal children."
Yatul: "They squander their father's love. We can't dally this time."

Yatul: "Have you scried anything new in the entrails?"
Bolar: "Very little. It's an uncertain time."
Yatul: "Not for us, it isn't."
Bolar: "For all of us."
Yatul: "Come back to me when you have something useful."

Bolar: "He's been spending a lot of time at the graves again."
Yatul: "Good. The more time he pines for the dead wives, the less time he spends finding a new one."
Bolar: "Be careful. The spirits can speak to the living if there's a strong connection."
Yatul: "Bah. He never had a connection with any of them beyond what his loins told him."
Bolar: "Maybe, but..."
Yatul: "We're the ones he loves. Me, and you."

Yatul: "Come, child, I will tell you how to track a snow cat."
Urog: "But you said that was impossible."
Yatul: "No, just very difficult. You have to look for shift in various shades of white."
Urog: "My eyes are sharp."
Yatul: "They are, but your mind has to be sharp, too."

Urog: "What's the most dangerous beast you've ever killed?"
Yatul: "Oh, probably a troll."
Urog: "They're fearsome!"
Yatul: "They are indeed. Nothing like your mother, though!"
Urog: "That's what everyone keeps saying. But you didn't kill her. That's what I was asking."
Yatul: "Oh of course. My mistake."

Urog: "What about my father? Was he a good hunter?"
Yatul: "Oh, you've seen your father just trying to chase a skeever from his house. He's a bit soft."
Urog: "Sometimes I'm surprised he's still the chief."
Yatul: "We all are, my dear, but sometimes the Divines reward those who don't seem to deserve it. Call it dumb luck."

Mauhulakh: "Bolar has been in a bad mood for weeks, now."
Yatul: "Oh? I hadn't noticed."
Mauhulakh: "Since Galka was taken from us. She's been... sad, I guess."
Yatul: "She's just worried about you. We all are. We just want you to be happy. We want to make you happy."