Asking Aela the Huntress, "Is there any work to be done?" will prompt her to tell you about the Totems of Hircine. She will say that she has located one and would be honored if you go with her to retrieve it. If you accept the quest, she will become your Shield-Sister and will replace your current companion.

Retrieve the Totem of Hircine 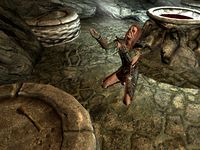 Aela prays to the Totem

Journey to the location given by Aela and kill the enemies lurking around. The location is radiant, and it can be any animal den, vampire lair, or warlock lair with a boss chest. The totem is most often found in a container in the furthest room from the entrance. Once you have the totem, Aela will approach and ask if you have it. When you tell her you do, she will tell you to bring it back to the Underforge. Once you're in the Underforge, place it on the marked area and the quest will finish. You can now pray to the totem to receive a new power while in Beast Form, which replaces your old one.

There are three total totems, each granting a different ability in Beast Form.

The Totems of Hircine

The totems are described in detail in the tome, The Totems of Hircine. By praying to these totems, you will be given a unique ability that replaces the older Howl of Terror; it is activated by pressing the shout button while in beast form. All abilities last for 60 seconds, though its duration can be increased by 15 seconds by equipping the Ring of the MoonDB before activating Beast Mode.