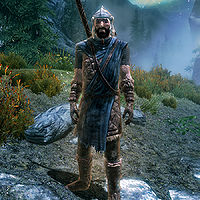 This Stormcloak Soldier is a Nord scout who will be encountered in Sovngarde during the related quest.

He wears a standard set of Stormcloak armor, which includes the cuirass, a pair of fur gauntlets, a pair of fur boots, and either a hide helmet or a scaled helmet. He is equipped with either a random leveled two-handed weapon, or a random leveled one-handed weapon and a leveled shield (all up to steel quality). He carries an extra steel dagger and a hunting bow supplemented with up to 15 steel arrows (1 arrow at 75% chance each). He also has a 50% chance of carrying a torch, a 25% chance of carrying 2-9 gold, as well as a slight chance of carrying some inn food and an amulet of one of the Divines.

As you enter the mist, he will begin walking towards you and will follow you if you try to pass by him. He will initiate conversation once you are within range: "Turn back, traveler! Terror waits within this mist!" If you ask him who he is, he will reply, "Near Giants' Gap, in the gloom before dawn, we marched, unsuspecting into the Imperials' trap. Then we stood and fought, our shield-wall defending until by dawn's light the Legion's ranks wavered. But I never knew if nights-end brought victory -- a swift-flying arrow to Sovngarde carried me."

If you ask him about the mist, he will explain, "I do not know -- but none have passed through. Alduin, his hunger insatiable, hunts the lost souls snared within this shadowed valley. Can you lead the way to where Shor's hall waits, beckoning us on to welcome long sought?" You will then be presented with two dialogue options:

"Yes, it's at the far end of the valley from here." (ends conversation)
"I saw it fair when first I trod this long sought path. The pain and fear vanished, dreamlike, and a vision beckoned to-- Shor's hall, shimmering across the clouded vale. But quenched was hope by the shrouding mist; darkened is my mind. I've lost the way and wander blindly. Hurry! Before Alduin your soul devours bring word to Shor's hall of our hard fate!"

"Shor's hall? What's that?"
"Don't you know? What drew you here? Surely your dreams showed you the way. The Hall of Valor, where heroes wait to follow Shor to the final battle. I saw it fair when first I trod this long sought path. The pain and fear vanished, dreamlike, and a vision beckoned to-- Shor's hall, shimmering across the clouded vale. But quenched was hope by the shrouding mist; darkened is my mind. I've lost the way and wander blindly. Hurry! Before Alduin your soul devours bring word to Shor's hall of our hard fate!"

If you choose the first option, it will immediately end the conversation. The second option will present you with another two dialogue choices:

"Follow me. I'll lead you through this mist."
"I'll try to hold to your hopeful purpose. Quickly, before this encompassing fog once more snares me in the World-Eater's net!"

If you try to speak to him again, he will randomly say one of the following lines listed below. The last four lines are also used by generic soldiers found in Sovngarde:

"The World-Eater waits within the mist! Bring word to Shor's hall of our hard fate!" (on exiting conversation)
"In life I felled foes unnumbered, fearless in battle; but no blade can defend against the terror of this gloom-stricken valley."
"Do you know the way? I'm weary and lost."
"Turn back! Before he finds you!"
"There is no escape. Courage is useless."
"Beware! The World-Eater waits within the mist!"

Once the conversation ends, the soldier will run into the mist. After a few steps, Alduin will roar, then swoop down and snap him up in his jaws. Alduin will then fly away, leaving no trace of the Stormcloak soldier except possibly his leveled weapon, which quickly disappears, leaving you only a limited time to search "him" and take his possessions without stealing. If you missed it, you can watch the same effect later as Alduin will similarly kill the nearby Stormcloaks and Imperials doomed to wander the mists.