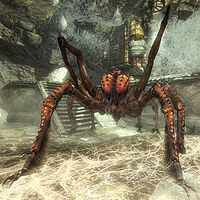 Nimhe is a giant frostbite spider living in Nchuand-Zel, an ancient Dwemer castle located deep within a mountain behind Understone Keep in the city of Markarth.

According to Calcelmo, who has been placed in charge of curating artifacts recovered from Nchuand-Zel, his workers had come to regard the giant frostbite spider as such a significant threat that they decided to name her "Nimhe", which translates as "The Poisoned One". She spends her time waiting in ambush in a large hole in the Excavation Site ceiling just before the entrance to Nchuand-Zel. The corpse of Alethius that lies near her lair is clear evidence of the challenge Nimhe has been presenting to Calcelmo and his workers.