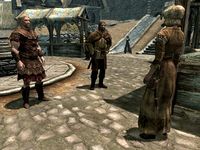 A confrontation in the streets

While in Whiterun, you will likely overhear an argument between Fralia Gray-Mane and two Battle-Borns, Idolaf and Olfrid, by her stall in the market.

Olfrid: Foolish old woman! You know nothing! Nothing of our struggles, our suffering!
Fralia: Nothing? And what of my son? Hmm? What of Thorald? Is he nothing? So don't talk to me about suffering!
Idolaf: Your son chose his side, and he chose poorly. And now he's gone. Such is the way of war. The sooner you accept his loss, the better.
Fralia: I will never accept his death! My son still lives. I feel it in my heart. So tell me, Battle-Borns, where is he? Where are you holding my Thorald?
Olfrid: Do you believe this old hag? "Holding him"? Why I've got him in my cellar. He's my prisoner. Face it, cow! Your stupid son is dead! He died a Stormcloak traitor. And you... you best keep your mouth shut before you suffer the same.
Idolaf: Come on, father. There's nothing more to be said here.

If you talk to Idolaf or Olfrid about the argument they will explain about how the Battle-Borns and Gray-Manes had been friends once, but because of the ongoing civil war the families have had a falling out due to them taking opposite sides. After the argument is over proceed to talk to Fralia; she will say that Thorald isn't dead and when asked how she can be so sure of that fact will comment that it isn't safe to talk there and will ask you to meet her in her house later if you want to help. 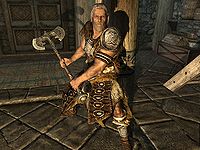 Head up the hill and enter House Gray-Mane where an armed man will rush at you, but Fralia calls out for him to stop; he is her son Avulstein Gray-Mane, who has been hiding in the house for fear of being arrested by the Imperials if discovered. He tells you more of the story and what he wants done.

Avulstein: I know that Thorald's not dead. I just know it. The Imperials have him, and are keeping him somewhere. But I don't know where. Those damned Battle-Borns... they know something. They're hiding it. They practically taunt us with it. They must have some sort of proof! There's got to be something in that house of theirs. I just know it. I don't dare leave the house myself. So I need your help. 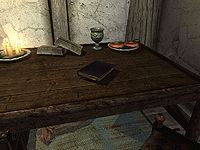 To find out what really happened to Thorald, you'll need to get your hands on an Imperial missive in the possession of the Battle-Borns. There are basically three ways to do this, each of which leverages a stealth skill: Lockpicking, Pickpocketing, or Speech.

In any case, return to the Gray-Manes' home with the missive and talk to Avulstein. He'll want to round up some men (Geirlund and Vidrald) to go rescue his brother; you can agree to meet him there or tell him to stay put and let you handle it yourself. After making your decision, it's on to Northwatch Keep.

Northwatch Keep is occupied by Thalmor Guards, who will all turn hostile if you ignore the warnings to stay away. If you talk to the guard at the front entrance, you will have an option to ask for the release of Thorald. The guard will respond with, "Are you joking? Even if we had a prisoner by that name, the only way he'd be released is by order of the Imperial Legion." If you travel to Castle Dour in Solitude and talk to General Tullius, who complains about the difficulty involved. "The Thalmor? Do you have any idea what you're asking?" If you've sided with the Stormcloaks in the civil war, he'll deny your request, saying "I'm sorry, that's just not possible. It would cause far too many problems." If you sided with the Imperials or you haven't started the civil war, he will offer a non-violent solution, saying "I can only imagine the headaches this is going to cause... Here, take this. Assuming they even honor it, you should be able to get your prisoner out." This method of solving the quest is incomplete, however, and cannot be pursued further. Once the diplomatic approach fails, return to Northwatch Keep and consider your options. 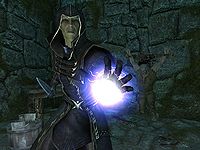 Near the end of the dungeon you'll reach a T-shaped intersection; to the left is the interrogation chamber where Thorald is being held, to the right is cellblock beyond which is the exit door. There are also racks of weapons in this area. Head left and kill the interrogator if you haven't done so already to get the Northwatch Keep key, then loot the big treasure chest and free Thorald. Lead him up through the cell blocks to the exit (you can release the prisoners here but they won't actually leave; they´ll fight the Thalmor next door, though) and use the interrogator's key to unlock the door. 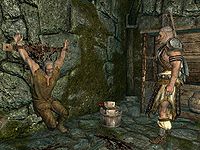 Once outside in a safe location, Thorald will thank you for releasing him, saying "I cannot thank you enough for rescuing me from this place. I suspect I'd never again see the light of day otherwise. But why would you risk your life for me, a stranger?". Once the details are explained he will ask you to get word to his mother and will give you a message that she should recognize. He'll then leave to join the Stormcloaks, as he doesn't feel safe in Whiterun anymore. If Avulstein is with you, they'll exchange a few words and he'll agree to follow Thorald; if not then Thorald will tell you that Avulstein should leave Whiterun too as the Thalmor will surely come looking for him (in which case Avulstein will already be gone by the time you get back to Whiterun).

Return to Fralia and she'll ask you where Thorald is. After you tell her that he's not coming, she'll say "What? After all this, I can't even see him? How... How do I know you're telling me the truth, and not just what I want to hear?", giving you a chance to use the secret message "suffer the winter's cold wind...", which she completes: "...for it bears aloft next summer's seeds." That's my boy. So it's true, then. For now, it's enough to know that he's alive. I can find peace in that. Thank you, dear friend. You've given me back my son." She'll then reward you with an enchanted weapon that Eorlund had made for Thorald. In the case that Eorlund is dead, she will instead give you 200 gold as a reward.