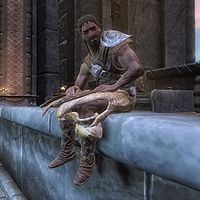 Hunroor relaxing in the Hall of Valor

Hunroor was a Nord warrior from the Second Era. He and four companions embarked on a quest to find Sovngarde. However, Hunroor, Erlendr, and Nikulas were betrayed by the wizard Grimkell, who turned them into stone pillars at Brodir Grove on Solstheim. They were avenged by Ulfgar the Unending, who killed the wizard. All of the friends eventually did find their way to Sovngarde. He is one of the few named warriors in the Hall of Valor. He wanders around the west wing of the hall.