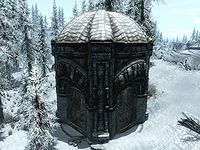 The Great Lift at Mzinchaleft

The Great Lift at Mzinchaleft is a Dwarven lift to Blackreach located south of Mzinchaleft ruins. The Great Lift at Mzinchaleft is a mechanical lift which can only be used and entered after starting the quest, Discerning the Transmundane. Inside the lift is a lever which, when activated, will bring you up or take you down into Blackreach. The top-side of the lift is housed in a building surrounded by metal barriers, one of which is a gate. The gate can only be opened from within, by pulling a lever directly to the right of the gate, after which the lift can be entered from Skyrim anytime you travel there (fast traveling puts you right outside the lift).

The map marker for this location does not appear until the lift is activated inside Blackreach.

The lift is Dwemer in origin and is one of seven ways into Blackreach, which must first be entered by traversing the ruins of Raldbthar, Mzinchaleft, or Alftand and using the Attunement Sphere from Septimus Signus to open a door to Blackreach. The lift will open just downhill of the Mzinchaleft Gatehouse inside Blackreach.

The lift is housed in a tower located just off of the road that leads from Dawnstar to Morthal, a short distance down the road from the lift that provides a short-cut exit from the ruins of Mzinchaleft itself. A frost troll may typically be found wandering the forest near the entrance. There is a corundum ore vein a few paces northwest of the entrance.

The exit in Blackreach brings you out a short distance south of the entrance from Mzinchaleft, northeast of the Hall of Rumination in the Silent City. Near where you find a giant and just north of an underpass with a Dwarven centurion in a docking station. Before using this lift to enter Blackreach, you must first lower spears blocking access to the lift in Blackreach, by activating a button on a sculpted metal head in front. Then ride the lift up and use a lever to open a gate in Skyrim. Once this has been achieved, the way will remain permanently available. There is also a corundum ore vein a few paces northwest of the entrance inside Blackreach.