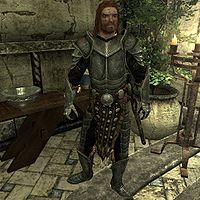 Bolgeir Bearclaw is a Nord warrior and housecarl to Jarl Elisif the Fair of Solitude, never leaving her side when she holds court in the Blue Palace.

As housecarl for the newly appointed Jarl Elisif, Bolgeir spends the majority of his life looking after her. He sleeps in the northeastern room on the ground floor every night from 2am until 6am, when Jarl Elisif enters the throne room. He then spends the entire day by her side and only allows himself a quick one-hour meal at 6pm. When the court ends at 10pm, Bolgeir takes the opportunity to relax and just wanders around near the throne room until he heads back downstairs and goes to bed.

He carries three weapons, all crafted in Orcish quality, including a dagger and two swords. He wears a set of steel plate armor with matching boots and gauntlets. He only carries a spare belted tunic.

A Nord of few words, he will quickly point you towards the castle steward, Falk Firebeard: "Please address all questions to the Steward, Falk Firebeard." He will also make it quite clear that he is uninterested in socializing: "My duty is to keep the Jarl safe. Not play nursemaid to you sycophants.", "Keep your weapon out of your hands, and we'll get along just fine." and "The Jarl has advised me not to talk about which court attendants I'd like to punch in the face. More's the pity."

Even if he prefers to keep quiet, there are times when Bolgeir has to protest Jarl Elisif’s rushed decisions:

Elisif: "Steward, I have an idea that might help to bolster the morale of our people in this difficult time. I think we shall have a grand parade, and let General Tullius march his troops from the Blue Palace to Castle Dour in all their finery."
Falk: "What a... fine idea, my Jarl. However, I would suggest we wait until the war has ended. After all, the General needs his soldiers out in the field, fighting battles against the Stormcloaks."
Bolgeir: "I must protest, my Jarl. A parade would make you an easy target for a Stormcloak assassin. You're safer here in the palace."
Elisif: "Oh, very well. I can see there's no changing your stubborn Nord minds. But when this war is won, I will have my parade!"
Falk: "Yes, my Jarl."

Bolgeir: "We lost another five guardsmen, my Jarl. If General Tullius continues to conscript our men and send them off to battle, we'll have none left to protect the city."
Elisif: "Yes, I know. The general acted with my blessing. It is vital that we bring Ulfric to justice, but that cannot happen until his army of Stormcloaks is defeated utterly."
Bolgeir: "Told you that, did he? I'm sworn to protect you, my Jarl, but I'm the last line of defense. The first line is the walls around this city and the men who patrol them. Men who, I might add, we're precious short on."
Elisif: "I'm aware of that, Bolgeir, and I appreciate your dedication. However, if we lose the war, the guardsmen of Solitude will make little difference in the end."
Bolgeir: "No disrespect toward the general, but sometimes I wonder if he's got your best interests at heart. In any case he won't be turnin' me into no Imperial soldier. I know my place, and it's at your side."
Elisif: "It comforts me to know that, Bolgeir."