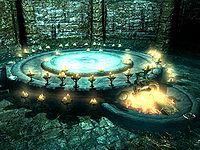 A mysterious link to Oblivion

The Midden's main feature is the Atronach Forge. Near it, the book Atronach Forge Manual can be found, along with the components to create the atronach recipes within. It refers to other Atronach Forge Recipes scattered about Skyrim.

Having a Conjuration skill of 90 will allow the Conjuration Ritual Spell quest from Phinis Gestor to be started, which will result in you obtaining a Sigil Stone, which can be placed on the pedestal of the Atronach Forge. Some recipes require this object. As part of Fall of the Space Core, Vol 1, the Space Core can be placed on the pedestal and is necessary to summon a Dovahcore Helmet.

The Atronach Forge has an offering box and a lever. The lever must be pulled once for each conjured result. Before activating the lever again, previous activation animations must begin or nothing will happen. The forge prioritizes recipes using two form lists of recipes. The first list contains the daedric recipes and is only used if the Sigil Stone is placed in the receptacle, and the second list is always available. From these lists, the items are prioritized in ascending order of their index number as indicated in the table below. The forge chooses to use ingredients alphabetically when multiple available types would be valid. The forge will not normally consume extra ingredients in the box, but due to a bug, each recipe which uses a soul gem will consume both a filled soul gem and an unfilled gem if both are available.

Finding a copy of the recipe in the world is not required to craft that item. If you supply the necessary ingredients, any of the items are available.

In the table below, "Delta" means the gold price difference between the forged object and the combined value of the cheapest items needed to create it and the priority is the order in which the recipes are chosen, with 1 being first.