Skyrim:A Return To Your Roots 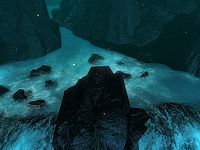 Seemingly unreachable Crimson Nirnroot, which can be harvested with a Whirlwind Sprint.

Sinderion had been obsessed with Crimson Nirnroot since purchasing a plant from a passing adventurer wanting to get something for the “noisy red weed” he found. Sinderion compensated the man, and then left Skingrad to set up a laboratory in Blackreach, the only known habitat of Crimson Nirnroot.

The quest begins upon the collection of a sample crimson nirnroot in Blackreach. Your journal will update to reflect your part in finding out the significance of this plant. In order to get started, begin at the beginning in Sinderion's Field Laboratory. The research facility is located in Blackreach, right across from the gates of Alftand Cathedral. Inside you will find Sinderion's remains still clutching his field journal. After reading the journal, the quest will update requesting that you collect thirty Crimson Nirnroot samples from Blackreach - a difficult but rewarding task.

There are forty-four samples of Crimson Nirnroot within Blackreach (including some inside Blackreach's buildings). Unlike the more common garden variety Nirnroot, the Crimson Nirnroot does not solely grow near bodies of water. Many plants are found near patches of mushrooms, Dwemer pipes or along the sides of the cavern. Since there are forty-four plants, all required samples can be collected at one time if you thoroughly explore Blackreach (see the Crimson Nirnroot article for more details on plant locations). Alternatively, if you are having a hard time finding enough plants, they will respawn. Leaving Blackreach for ten days allows you to collect another sample from any previously-harvested plants.

After collecting the required number of plants, the quest will update again and you will be asked to deliver them to Avrusa Sarethi, Sinderion's former colleague. She is currently residing at Sarethi Farm, between Riften and Ivarstead. Give Avrusa the thirty Crimson Nirnroot samples to complete the quest and receive The Nirnoot Missive. You will also be provided with Sinderion's Serendipity, an ability which provides a 25% chance to mix two potions instead of one.