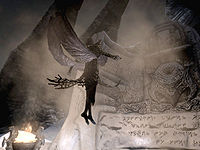 Whirlwind Sprint is a shout that causes you to rush forward at great speed. It can be used even if you are overencumbered.

This shout carries you horizontally, so do not use it to go down slopes; you will find yourself in mid-air when the sprint ends.

There are many hidden areas that are only accessible via this shout. This is only a list of places where valuable loot can be found.