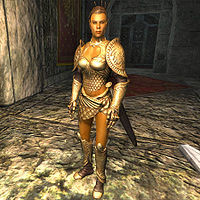 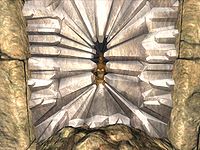 Staada trapped in her crystal cell

Staada is the commander of the Golden Saints at Brellach. She needs rescuing in The Helpless Army quest if you have chosen to become the ruler of Dementia.

She wears a leveled Golden Saint armor and wields a golden longsword. She can also cast the standard set of Golden Saint spells to aid her in battle, as well as possessing the standard Aureal birthsign and lesser power.

During The Helpless Army, you will have to free her from a "cell" made of crystals of Order in the Hall of Reverence. If you talk to her before having shattered the crystals, she'll explain: "You must set me free! The barrier can't be broken by you. It's too tough... use the chime! Ring the chime, and that may shatter it!" After ringing the chime, the crystals will shatter and she will walk up to you to thank you: "You have my thanks for freeing me, but... Just who are you?" When you tell her you're the Duke/Duchess of Dementia, she'll apologize for her ignorance: "Your Grace/My Lady! I am sorry, I did not realize... Where is Thadon? Have you seen him? That traitorous coward!" When you ask her what happened, she'll explain: "Thadon... the snake. He showed up, asked for a contingent of guards. Said there was trouble, and that we were needed. We were so focused on organizing quickly that by the time we realized he'd let Order in himself, it was too late. We were split up and picked off. But it doesn't matter anymore. The only thing that matters now is the Wellspring. We must reach it at once!" When you ask her about the Wellspring, she'll tell you about it: "The Wellspring of the Aureal. It's what links us to this realm, where we return to the world from the Waters of Oblivion. If Thadon helps Order sever that link... my kind will be annihilated. The realm will be lost to us. We must get to the Wellspring and stop them! I will follow your lead. The Wellspring is at the heart of Brellach; follow the waters to reach it. I am yours to command, Your Grace." She will then follow you around everywhere. If you talk to her again, she will remark: "Forgive me, but now is not a time for talk. We must reach the Wellspring with all possible haste. If it is damaged, we are lost."

After having restored the wellspring in the Font of Rebirth, she will quickly catch up to find you there. When the last of the Forces of Order have perished, she'll thank and reward you upon greeting you: "The Wellspring is restored! You have saved us. We are forever grateful, your Grace. Please, allow me to teach you this spell, so that you may summon our kind to you in times of need. Also accept this gift of armor. It is the least I can do to show thanks for your help.", the spell being the Summon Golden Saint greater power for 120 seconds and the armor being a leveled Golden Saint armor and Golden Saint helmet. If you ask her about Thadon, she'll tell you: "No sign of him yet. We'll do our best to track him down, and deliver him to Lord Sheogorath for a fitting punishment. The traitor must be brought to justice!" If you ask her what happens now, she'll explain: "Our warriors will scour the halls of Brellach, removing any last elements of opposition. Then, we will immediately return to our duties." When you tell her you'll take your leave, she'll remark: "Indeed. Lord Sheogorath will be anxious to hear of our victory, I am sure." Greeting her again after that but before having reported to Sheogorath will make her point you towards him: "Your work is done here, Your Grace. I'm sure Sheogorath will want news of your success." She will remain where she stands at that point for the rest of the game.