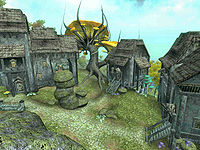 Highcross is a village in Mania between The Jester's Spine Mountains and Saints Watch (quest-related).

It lies roughly at the northernmost section of The Jester's Spine Mountains and consists of three houses owned by the town's occupants, who seem to be quite a leisurely bunch. The Imperial, Bruscus Dannus, concerns himself with nothing other than cleaning the road that runs through the settlement. The most eccentric Highcross resident is the Argonian Runs-in-Circles, whose very name gives enough explanation to her erratic and often comical behavior. The Dunmer, Mirili Ulven, is quite serious however, with her preoccupation of researching the plant life, wildlife, and cosmic patterns of the Shivering Isles.