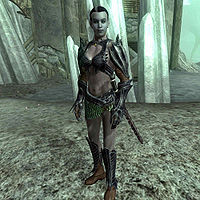 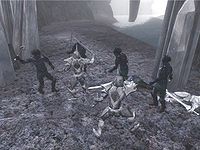 Grakendo Udico is a Dark Seducer Officer who will assist you in retaking Passwall from the forces of Order. She is enabled at the beginning of the related quest remains there for the duration of the game.

She wears a leveled suit of full Dark Seducer armor and wields a Dark Seducer longsword. In addition, she will also be able to cast a set of standard Dark Seducer mage spells as well as having her racial ability.

When you arrive at The Fringe, she will be fighting off hordes of Knights of Order in the middle of Passwall, guarding it from further enemy troops and awaiting your arrival. With only a few Dark Seducers at her command, the battle seems lost at first and you will have to help the struggling defenders fight the Knights.

After you have helped her and her depleted soldiers defeat the first wave of knights, she will immediately enter conversation with you and explain her desperate situation: "Your Grace, the situation is grim. Passwall is under attack. We are outmatched and outnumbered. Last night, as dusk fell, the spire at the center of town became active. Soon after, the area around it began to crystallize and change. It wasn't long after that the Knights came." When asked to elaborate on the Knights, she will say: "The Knights are relentless. They do not tire. They do not fear. And they do not stop coming. They appear out of nowhere at the base of the Spire. We kill five of them, five more come. We've lost too many of the Mazken already. I fear that we will not be able to hold the town for much longer."

She will also provide information about the mysterious Spire: "You've seen the Spire in Passwall. It is believed to be a monument from times past, but its true purpose appears to be more sinister. It appears to be a source of power for these invaders. A... portal, or some sort of gate. I don't know. If we cannot disable or destroy it somehow, I do not think that we can stop this invasion." She will also reveal she has a plan: "I do have an idea how we might be able to stop them, but for now our primary concern must be our survival. I've been losing Mazken with each attack, and I'm down to nothing but men. We are pinned down here. If we lose, the Gates of Madness will fall. If the gates fall, the enemy will flood into the Isles. We will be helpless to stop them. Now that you've arrived, perhaps we can slow them down." When you ask her what to do next she will say: "We cannot talk now -- we don't have very long until the next wave arrives. Even though I have served with these Mazken for decades, as the Duke of Dementia, it is your right to command the troops. Command them if you will, or leave it to me. Either way, make haste. Our time is short."

If you decide to command the troops yourself, she will say: "Very well, Your Grace. I hope for all of our sakes that your experience is greater than my own. Speak with the Mazken and tell them where you wish them to stand. Then speak to me when you are satisfied." If you choose to make her commander in charge, she will respond with: "I thank you for your trust. In your name and for the sake of the Shivering Isles, I shall not disappoint you. Inspect the battlefield and provide what aid you can to the troops. Speak with me when you feel that they are ready for battle. MAZKEN! Form up! For the sake of your sorry male hides, move! MOVE! Are you prepared for battle, Your Grace?"

If you ask her how to issue orders she will explain: "Speak to each of the Mazken to give them orders.The front line will arm themselves with axes of war. They will hold the line against the enemy's charge. Those who you designate as archers will head to the rear and keep their distance when the enemy draws close. Those with blades and shields will hold the flank. When the enemy draws near, they will close in and attack." At this point, she will also provide some enlightening information of the strategic position of Passwall: "This town has stood on the edge of the Shivering Isles since they were borne from the mists of time. For our purposes, it serves as a defensible outpost. That is, against typical enemies who can know pain, torment, and death."

After the exhausting fight against three waves of Knights, Grakendo will walk up to you and say: "Victory is ours... for the moment.We must discuss our next move. The spire is obviously their source of power. This battle will not end until we find a way to shut it down." Once again, she will have a plan ready: "I am not certain. But do not lose heart, I have an idea. The ruins of Xeddefen run under Passwall. The entrance to the south of the town has been sealed for centuries.One of my scouts reported that the ruins have been opened recently and a number of these Knights are now guarding the entrance. If we attempt to assault Xeddefen, Passwall will be overrun and we will lose the Fringe.Additionally, our forces are dangerously thin. We have no idea what opposition may await us inside. A frontal assault is not an option." When you suggest to enter Xeddefen yourself, she will comment: "Your insight is impressive. While we draw their attention here, you should be able to slip inside Xeddefen. Once inside, search for the source of the Spire's power. It must be underground somewhere. Once you find it, destroy it. Good luck, Your Grace. May the voice of the hidden guide you to the way."

When you head off for Xeddefen, she will remain put and hold the line until you come back. When you do, she will be surprised and overwhelmed: "Your Grace! You... you're alive! Truly, you are the greatest warrior ever to hold the seat of Dementia!I was certain that no one could survive the spire's collapse, but here you are! By the Staff, you are more than worthy to lead us. I fear that our work is not yet done. The area is still overrun with Knights that were not destroyed in the spire. You should return to the Palace and speak with Sheogorath. Ask him how he plans to defend this realm." If you approach her again she will say: "The citizens of Passwall must begin to rebuild. Much has been lost, and I fear that this is only the beginning."