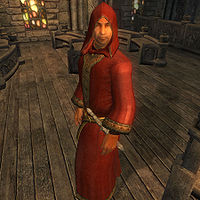 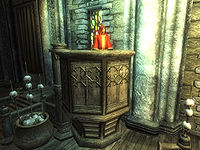 Dervenin preaching in the Sacellum

Dervenin, a Bosmer priest, is the High Priest of Mania. He lives in the Sacellum Arden-Sul in New Sheoth. During the Flame of Agnon quest, he will try to persuade you to light the flame for Mania. He will also inform you on how to perform the Ritual of Mania.

His devotion for Arden-Sul is so ardent that he spends literally every instant of his life walking around the Sacellum, in apparent peace, without ever eating or sleeping. His rather monotonous schedule is broken frequently during the related quests. Once you have lit the Cold Flame of Agnon, he will move behind one of the pulpits of the Sacellum and immediately initiate conversation with you once you enter. If you choose to light the Mania flame, he will proudly escort you to the bracer and set it ablaze. When the Ritual of Accession commences, he will travel to the left pulpit, only to come back down and talk to you if you killed Thadon and placed his blood on the altar. Once you become Duke or Duchess of Mania, he will conveniently move out of the way of Syl and Sheogorath when they give their speeches. If you lit the flame of Dementia, once The Helpless Army quest is active, every time you enter the Sacellum he will start preaching from the pulpit, hoping to convert you to Mania.

He wears upper-class attire consisting of the rare red silk robes, the even rarer matching hood and a pair of green velvet shoes. He is armed with a silver dagger. In addition, he relies on a set of leveled spells from the schools of Alteration, Destruction, Mysticism and Restoration. He also possesses a lesser power that allows him to evoke a Golden Saint.

Dervenin will greet you with "Dervenin, High Priest of Mania at your service. What brings you to this holy place on such a fine day?" On his beloved Arden-Sul he will tell you: "Yes, Arden-Sul. Doesn't the name simply roll wonderfully off the tongue? He was the sovereign of thought and a regnant artist. To call him a simple craftsman would not suffice; know him as the Artificer Superior. Words dripped like honey from his tongue and his songs were intoned with extraordinary verisimilitude. Had we been blessed with his constant presence, the Isles would be a Maniac's paradise."

If you tell him you are considering Dementia he will try to dissuade you: "You should know, that in addition to the adulation of the people of Bliss, there is also a more... earthly reward. The Hero who lights the Great Torch for Mania is traditionally awarded the Raiment of Arden-Sul. Not that this should influence your choice at all. Now, what do you say?" If you ask for time to think he will urge still: "Do not think about it. Dream about it! Let your mind soar on flights of fancy! I know you will choose well, in the end." If you finally decide to light the flame for Mania he will be overwhelmed: "I knew I saw the glint of true Mania in your eyes, my child. Go now and let the holy Flame inspire the people of Bliss to new heights of madness."

If you then light the flame of Mania he will be ecstatic: "The Great Torch shines with the pure light of Mania! You chose well! In accordance with the ancient tradition, receive now the Raiment of Arden-Sul in honor of your mighty deed in service to Mania.", "You chose well. The Great Torch shines as a beacon of Mania to inspire and enflame all who gaze upon it!" and "Happy times! Happy days!" If on the contrary you went for Dementia, he will refuse to converse with you: "I'm disappointed in your choice. Why you would choose to honor the fetid madness of Dementia is beyond my understanding."

During the Ritual of Accession quest Dervenin can provide some background info: "An important part of our history, my friend! I would be glad to tell the tale if you have a moment." If you ask him to get to the point he will continue unabated: "Certainly. When the ruler of Mania has decided it is time, he will choose a successor from his court. The successor is invited to a huge celebration... a night of hedonistic revelry; wine, song, and, of course, Greenmote. During this, the exiting regent imbibes three doses of the potent drug. This causes his heart to burst... and his lifeblood flows from his body. The successor then gathers the drug-tainted blood and brings it to the Altar of Arden-Sul in the Sacellum. Once this is done, I will proclaim the successor a Duke or Duchess. Then, Sheogorath gives His blessing, and the cycle is completed."

If you asked for the details he will happily fill you in: "Arden-Sul was perhaps the greatest Duke to walk our land. Many years ago he decided to hold a night of absolute indulgence, resplendent with dance, wine, and sex to celebrate his fondness for his brethren. The Greenmote flowed like water in a stream as the revelers voraciously succumbed to its rapturous ways." If you ask him to expand he will continue: "Ahhh, but it was. As the bacchanal reached a crescendo, the people began to clutch their chests as their very hearts exploded! The Greenmote had taken its toll. The ground stained a deep crimson as the sanguine liquid flowed from their lifeless bodies. To represent that night, when the ruler of Mania is to be replaced, he partakes of the Greenmote and allows his lifeblood to flow upon the Altar."

If you manage to slay Thadon, he will joyfully proclaim you as his successor: "Once again has the Ritual of Accession come full circle! The Blood of Thadon has been consumed by Arden-Sul's will, and all of Mania welcomes you with open arms. I now declare you Duke/Duchess of Mania of the Shivering Isles! May your light shine upon all our happiest days." If on the other hand you became Duke/Duchess of Dementia he will be bitterly disappointed: "You've made your choice and forsaken the name Arden-Sul. Please, leave me be."

At different stages in the Main Quest, Dervenin will share different rumors with other NPCs: