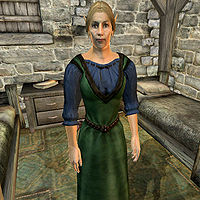 Sister Angrond strolls around the Priory

Sister Angrond is a Bosmer priestess living at Gottlesfont Priory. She and Sister Phebe Jeanard are avid gardeners, and specialize in the cultivation of Lady's Mantle. Feel free to pick some when you visit.

She wears a set of middle class clothing: a blue & green outfit and a pair of quilted shoes. She carries a spare pair of tan linens and a small amount of gold.

Sister Angrond possesses a custom list of spells that befit her role as a healer: