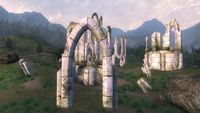 This zone contains more traps than enemies; your first taste are the three Swinging Blade traps (D) found in the corridor connecting the two main rooms. These are actually quite easy to pass through since only one blade per trap will be swinging. In the first chamber are two Hidden Doors at F and G which will open once you are close enough. Behind them are two enemies and a minor loot chest. The last two rooms contain four Gas Traps (E) each, these can be easily bypassed by sticking to the walls of the rooms. 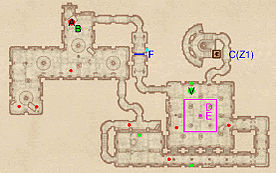 The first large room is quite tricky: a large Gas Room trap (D) is in the middle of the room and fighting the two enemies without getting trapped inside can be challenging. A Varla Stone (V) can be found in an alcove in north side of the room. From this chamber, two paths depart: up the stairs to the right leads to gate F, which unfortunately only opens from the other side (cyan dot on map). Heading left is therefore the only viable option. You will eventually end up in a large chamber containing the Boss chest (B); which is guarded by the boss-level Monster (A) and up to three other enemies.