The Morag Tong is an ancient guild of assassins headquartered in Morrowind, celebrating murder in the name of Mephala. They have been active since at least the First Era, and their targets have included multiple rulers of Tamriel, high-ranking Dunmer nobility, and countless others. The Morag Tong is unique in its sanctioned status under the Morrowind government to perform legal executions, bound under contracts called 'writs', although extralegal 'gray writs' are rumored to exist.

The origins of the Morag Tong are shrouded in myth. The orthodoxy of the Tribunal hold that the Daedra Mephala founded the guild to teach the early Chimer how to defend themselves and destroy their adversaries.[1] Others state it began as a cult which, while also following Mephala, ultimately revered the 'Dread Father' Sithis above all.[2] However it began, the guild quickly rose to prominence in the environment of early Morrowind's bloody House conflicts, quickly establishing the writ system and a reputation as peerless killers. At the end of the First Era, the Tong received its highest-profile contract to date, on Emperor Reman III.[2] Their success paved the way for the Akaviri Potentate to rule over Tamriel in the early parts of the Second Era, as the Tong slowly expanded its presence across Tamriel. It came full-circle when, in 2E 324, Versidue-Shaie, the Potentate who had originally ordered Reman III killed, was assassinated himself by the Tong. By this point, however, the guild was over-confident and prideful, and 'MORAG TONG' was scrawled on the palace walls in the Potentate's own blood.[3]

This high-profile assassination started a frenzy among the nobles of Tamriel who realized that they too were at risk from the Tong. "Every sovereign gave the cult's elimination his highest priority",[3] and it was viciously suppressed in every province of the Empire, only retaining the barest presence in its homeland of Morrowind. After this, the Morag Tong sunk out of public sight for almost a century. It is during this time that most agree the Dark Brotherhood arose as a splinter group, establishing itself mostly outside of Morrowind as a more business-oriented guild operating entirely beyond the law.[2] 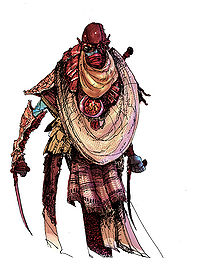 While the Dark Brotherhood rose to greater prominence elsewhere, the Morag Tong maintained a formidable presence in Morrowind, being largely devoted entirely to Mephala in her position as Anticipation of the god-king Vivec,[verification needed] and having abandoned any association with Sithis - indeed, they are mortal enemies of their old splinter group, the Dark Brotherhood, who continue the worship of Sithis.The Tong maintained its traditional original position of the First Era: that of an impartial middle-man in the conflicts between the Great Houses in the bloody business of Dunmeri politics. Some within the faction, however, feel that their services are undervalued as rich nobles with petty grievances use the Tong too freely, not respecting the ancient institution; however, they do not act outside of Morrowind, nor do they interfere in politics higher than that of inter-House rivalry. Nor do they apparently act on their own account, except against the Dark Brotherhood or worshippers of Mehrunes Dagon. Indeed, sometimes they have been hired to track down and kill outlaws, as an alternative to the more traditional Fighters Guild bounty.[verification needed]

After the Argonian invasion and destruction of Vvardenfell it was said by a former Morag Tong member who joined the Thieves Guild that the Morag Tong disbanded and vowed to rise again one day. Even though the devastated factions within Vvardenfell are gone, the Morag Tong still has a presence on the mainland of Morrowind and even takes contracts on Solstheim.

Ultimately, the Morag Tong pledges itself to the service of Mephala, Daedric Prince of lies, deception, and murder. In Morrowind, the guild is led by a Grandmaster, who traditionally serves for life until killed in the line of duty. Each guild hall is run by a Master, who has a high level of autonomy with regards to accepting writs and issuing assignments. Individual members, however, cannot accept writs without the approval of the Tong, or else they face punishment.

The Morag Tong fills a vital role in Dunmeri politics by preventing all-out war between the Great Houses. Rather, they follow Mephala's advice to "kill them with secret murder"[1] by employing Tong assassins in targeted strikes to accomplish political goals. To facilitate this, the Tong maintain a strict policy of impartiality, accepting any job provided it is proposed in the correct manner and with the proper payment. Because of its official sanction, the guild has the authority to print legal bills known as Honorable Writs of Execution, which excuse a Tong agent of all legal misgiving associated with any Tong related business. As such, Morag Tong executioners are expected to give themselves up immediately following an execution even if the death itself would have remained a mystery, in order to legally absolve themselves and avert any possible long-term ramifications. Tong executioners who fail to do so are considered suspect by their order and may be subject to major internal investigations, as the Tong does not harbor criminals.

The most famous assassins who cannot continue their duty are sent to Vounoura, an island which is not more than a month's voyage by boat from Tel Aruhn.[4]