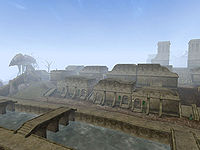 Balmora ("Stone Forest" in Dunmeris) was the nominal district seat of House Hlaalu, and the second largest settlement geographically on Vvardenfell after Vivec. Balmora was located at the southernmost edge of the West Gash, right at the point where the region converged with the Ashlands, the marshes of the Bitter Coast and the lush plantations of the Ascadian Isles. The Odai River ran through its heart and divided it into four districts, High Town, the Commercial District, Labor Town, and nearby Moonmoth Legion Fort.

Balmora played host to all three members of the Tribunal in the days leading up to the end of the First Era.[1] The drink Balmora Blue is named after the city. It is a potent, contraband beverage made from moon sugar and other ingredients.[2]

The town was destroyed during the Red Year by the eruption of Red Mountain.[2] In a major relief effort out of Mournhold led by House Redoran, Balmora, along with certain other settlements around Vvardenfell, were rebuilt following the Red Year.[3]

Moonmoth Legion Fort was an Imperial Legion fort located east of Balmora in the West Gash region of Vvardenfell. The fort offered an Imperial Cult altar, and apothecary, enchanting, smithing and trading services.