A Redguard zombie, followed by his puppetmaster 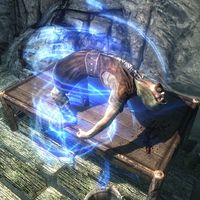 The moment of resurrection

Zombies are any creature or person that has died and been temporarily resurrected. Zombies are still capable of warfare despite no longer being able to think for themselves; thus, they are often used as extra bodies in a fight. Zombies are most typically created by vampires and necromancers for use in combat; however, you may also create your own. Zombies are typically resurrected through the use of a temporary reanimation spell or enchantment. For more details about the use of zombies as allies, see this page.

Most NPC zombies will groan while animated and may say "Must...kill,", "You...must...die," and "Kill," while in combat. They will occasionally make comments indicating gratefulness for release from their undeath upon defeat. Zombies disintegrate into lootable ash piles at death or once the reanimation spell effect wears off.