In Solitude, Jala, the innkeeper and residing bard at the Winking Skeever will all tell you about a scared Dragon Bridge resident who recently arrived to ask Jarl Elisif for help. They will not reveal anything else, so head to the Blue Palace, where you will witness Varnius Junius trying to convince Elisif that the strange occurrences near Wolfskull Cave should be taken seriously. While Elisif tries her best to calm the near hysterical Varnius, her court wizard and steward will both disregard the claims: 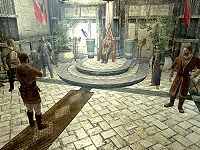 "Haafingar's people will always be safe under my rule."

Varnius: "I swear to you, unnatural magics are coming from that cave! There are strange noises and lights! We need someone to investigate!"
Elisif: "Then we will immediately send out a legion to scour the cave and secure the town. Haafingar's people will always be safe under my rule."
Varnius: "Th...thank you, my Jarl thank you."
Sybille: "Your eminence, my scrying has suggested nothing in the area. Dragon Bridge is under imperial control. This is likely superstitious nonsense."
Falk: "Perhaps a more... tempered reaction... might be called for?"
Elisif: "Oh. Yes, of course you are right. Falk, tell Captain Aldis I said to assign a few extra soldiers to Dragon Bridge."
Varnius: "Thank you, Jarl Elisif. But about the cave..."
Falk: "I will have someone take care of the cave as well Varnius, you can rest easy. You're dismissed."

After the court has acknowledged his claims, Varnius Junius will be relieved and leave the castle, unaware that nobody plans on doing anything to solve his problem. Speak to Falk Firebeard, who will admit he thinks Varnius is overreacting and that he has his hands full dealing with the recent murder of High King Torygg, the grieving Elisif, and the ongoing war. Offer to take a look at Wolfskull Cave for him, and he will gladly accept.

Wolfskull Cave is located due west of Solitude and north of the Statue to Meridia. As you arrive, two skeletons will guard the entrance, hinting at darker things to come. Enter the cave and proceed through the first chamber. Before long, you will be attacked by hordes of leveled necromancers, all keen on protecting their secret. As you progress, leveled draugr and more skeletons will attack. In the third chamber, you will arrive at a pit, and will have no choice but jump in. Take the northern tunnel and enter Wolfskull Ruins. 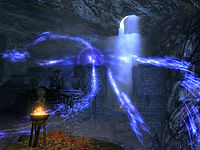 As you enter, it quickly becomes clear that something is very wrong in the cave; blue beams of light spear across the room and chanting voices can be heard:

Take a look from the ledge and you'll notice that the blue lights all lead to the same platform, high above ground level. Backtrack a bit and locate the tunnel leading west. The chamber ahead is covered in oil, so use it to your advantage against the patrolling necromancer.

Back in the main chamber, there are stairs leading further down and enemies will attack. Fight your way to ground level and enter the ruin where a set of stairs will lead back up. As you make your way upstairs, it becomes apparent that the necromancer's ritual is about to go wrong, as Potema will shout: 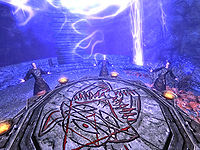 "Summoned with words. Bound by blood." 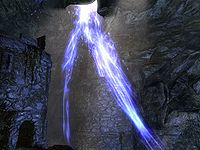 Keep going up one set of stairs after another, fighting the opposition on your way. As your reach the source of the blue light, the ritual master will speak once again: "Something is wrong. There is an intruder." As you climb the tower, an additional four necromancers will attack. At the top, you will find the ritual master busy performing the ritual to revive Potema. There is only one way to stop her. When she is dead, the blue light will disappear through a hole in the ceiling and everything will be quiet. Read the Light Armor skill book The Refugees from the altar, then activate the lever to lower the drawbridge. Loot the chest on the other side and follow the path, a shortcut back to the first chamber of Wolfskull Cave.

Back in the Blue Palace, busy castle steward Falk Firebeard will be curious to know whether you found anything other than wild animals and bandits in Wolfskull Cave. When you tell him that necromancers tried to resurrect Potema, he will be shocked and will ask if you stopped them. At this point, you will have no choice but to tell him you interrupted the ritual and that it is done. He will then explain that you have done Solitude a larger service than you can imagine and reward you with a leveled amount of gold. However, Potema is far from defeated. If you wait a few days, a courier delivers a very concerned letter from Falk Firebeard, beginning the quest The Wolf Queen Awakened.