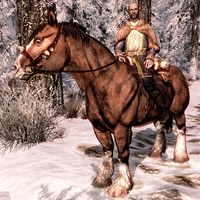 The male Noble is an Imperial citizen who is often seen on horseback accompanied by a lone Imperial soldier and wandering across Skyrim's holds.

He will refuse to speak to you and threatens to order his bodyguard to attack, which he states: "I have nothing to say to you. Now move along, or I'll order my guards to attack." Despite his threats, he or his guard will not be hostile anyway. If his guard dies, he will still be snooty, although more humble: "Keep away. If I am harmed, people will come looking."

His attire matches his status and consists of fine clothes and a pair of fine boots. He wields a leveled dagger of the best possible quality.