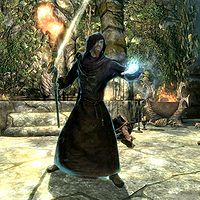 Malkoran is a Breton necromancer who resides in Meridia's Temple. You are tasked with removing him from the temple during the Daedric quest The Break of Dawn. He is accompanied by many corrupted shades which he has created from the casualties of the ongoing war. He has an extremely powerful frost spell that can potentially kill in one hit, and a great deal of health, making him extremely hard to kill. 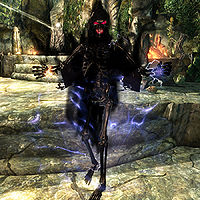 Malkoran's Shade is a floating, wraith-like skeleton surrounded by a dark mist. It knows Destruction spells of all elements, and it will also use Wards to protect itself during combat.