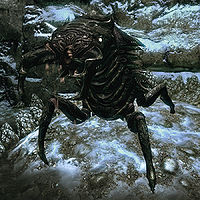 Chaurus are medium to large hostile earwig-like creatures found in swamps, marshlands, and deep underground caverns. They vigorously project a strong acidic poison, which can eat through most armor pretty quickly. They can cling to walls and have large amounts of health. Chaurus are often found in the company of Falmer, who breed them for their chitin. Chaurus Hunters and Chaurus Hunter Fledglings (along with Chaurus Cocoons) appear after the Dawnguard add-on is installed, and have apparently transformed from a regular Chaurus.

In a recipe book for chaurus pie, the author recommends that if hunting them, you should "get yourself some good armor and a nice big sword, and [...] some stout men who won't run off at the first sign of trouble." The suggestion to use melee force against them seems well-founded, because they are less likely to poison you with their melee attacks. Some additional strategies include: