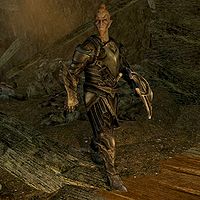 The Champion of Boethiah, wearing the Ebony Mail

The Champion of Boethiah is a Dunmer residing in Knifepoint Ridge. Killing him is the final challenge in Boethiah's Calling. He is equipped with the Ebony Mail, as well as ebony boots, ebony gauntlets, and a leveled enchanted sword, which are your reward for finishing the related quest.

He has unique dialogue explaining why he renounced Boethiah, but due to his high aggression, you must calm him in order to hear it. "I told you. I'm done with all that. There's enough blood on these hands. I'm interested in creating things now." He further explains, "Mind my words or I'll mind them for you: I'm slave to no man, no god, and no Daedra. Boethiah talks about leaving your mark, a sign of your passing.... Well, you can make a mark on the world without treachery and murder. Whenever a man's life is saved by armor made with these hands, these hands have changed that man's destiny and his family's. So you can tell that heartless Daedra bitch I'm done doing her dirty work."

The champion even admits to expecting Boethiah to send someone after him, saying, "The Prince of Plots usually gets what she wants. I'm surprised I'm not dead already. She must have had some reason to keep me alive so long." But he is also not afraid of death, and instead resigns himself to it: "A man who feels no fear has no heart. I know fear. But it does not control me. If you desire to fight me, then let's get this over with."