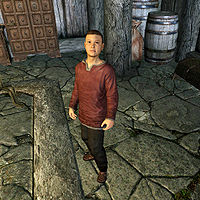 Assur is a Nord child who lives in the jarl's longhouse in Winterhold with his parents Jarl Korir and Thaena. He is Korir's heir and will become the next jarl of Winterhold after Korir, unless Korir is deposed. His only playmate is Eirid, with whom he plays "Hunt the Elf".

Assur wakes up at 9am for a one-hour breakfast, then wanders the longhouse. At 12pm, he goes outside to play with Eirid, stopping at 6pm for a two-hour dinner at the Frozen Hearth. He stays home for one hour until 9pm when he goes to bed. If the Imperial Legion takes over Winterhold, however, he and his parents will be exiled to Brunwulf Free-Winter's House, where they will stay all day.

Assur wears red colored child's clothes and a pair of shoes. He carries a selection of food and toys and a small amount of gold.

When near him, he will say things like "My pa says elves are bad and not to trust 'em.", "Did you know that most of Winterhold fell into the sea? I heard it's because of that College.", "Someday I'm gonna grow up and be the Jarl.", and "I heard the College teaches you how to kill people with magic. Is that true?" If you are of a human race, he will tell you, "We don't get many people like you visiting Winterhold. Usually it's elves." If you are not, he will instead ask, "How come you're in Winterhold? My pa says people like you are the reason no one lives here anymore." In exile, he will only say, "Pa says the Empire made us leave, but the Empire just does whatever the elves tell them to."

Sometimes, Assur will come up to you and say, "Eirid and I are playing Hunt the Elf. It's my job to find the Elf, and kill it dead." and continue with "Have you seen it?" You have five dialogue options to reply with:

Whichever your reply is, he will run off to try and find Eirid.

Meanwhile, if you approach Eirid, you will find that she does not think the same as Assur about the College: "Assur says his pa says the College made lots of bad things happen, but the mages I've seen look nice." She'll also tell you how Assur acts when they play: "There's not many people left in Winterhold, so I only have Assur to play with, and sometimes he's mean.", explaining why she thinks so: "He always wants to play 'Hunt the Elf', and he makes me be the elf."