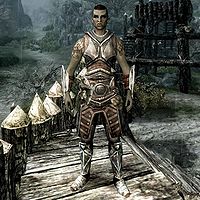 Arob is an Orc warrior and the hunts-wife of Chief Burguk in Dushnikh Yal, the Orc stronghold southeast of Markarth.

While Burguk’s favored wife Shel gets to be near the chief around the clock, Arob and forge-wife Gharol practically never see their husband and spend all their time doing their duties in the hold. Arob and her son Nagrub share the same responsibilities, patrolling the stronghold day and night, without ever eating or sleeping, at times scouting the surrounding wilderness for prey.

She wears a set of leveled armor, excluding the helmet; at level 1 she wears iron armor, at level 6 she wears steel armor, at level 18 she wears steel plate armor and at level 25 she wears orcish armor. She never sleeps but carries a spare set of ragged trousers along with the key to Burguk's Longhouse. She wields leveled weapons as well; at level 1 she uses a steel war axe and a hunting bow; at level 6 she uses an orcish war axe and an orcish bow. She carries at least twenty leveled arrows and a selection of middle-class food and gold.

When approached she will briefly introduce herself and her opinion on Chief Burguk: "I am the hunts-wife of this stronghold." and "Burguk is a fine chief. He brings strength and wealth to the stronghold." She may also recommend a few service providers in the hold: "Murbul knows many poisons and cures if you need them." and "You should see Gharol if you're looking for a blade or armor."

During the long days and nights, Arob and Nagrub will occasionally share their happiness:

Nagrub: "Ah, the air is good today. I welcome the smell of blood from all the kills I will make."
Arob: "Patience, my son. The hunter days not welcome the blood of his prey, he waits for it."

Arob: "The air has the smell of beasts. The hunt is good today."
Nagrub: "Yes, mother. I'm eager to prove my skills today."