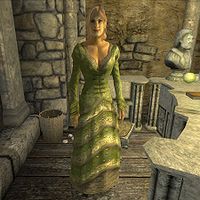 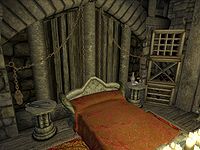 "I'll remind you why they say 'love hurts'."

Sontaire is an Altmer bookseller living in Bliss, New Sheoth. She owns Books of Bliss, the only bookstore in the Isles. She seems to be quite the seductress: talking to her when playing a male character causes her to flirt; however, if playing a female she will instead comment that she doesn't like "competition". To see exactly how "seductive" she is, investigate her bedroom on the second floor of her shop: around her bed are chains and shackles.

Bizarre bed habits aside, Sontaire's everyday life reflects that of a typical merchant and she only allows herself very little spare time. She sleeps in the private quarters above the main trading room every night between 10pm and 6am and always starts the day with a two-hour breakfast seated at the small dinner table near her beloved bed. She heads downstairs at 8am, unlocks the door and positions herself behind the counter, ready for another day of hard work. After twelve hours, she closes up shop and heads upstairs, where she eats a two-hour dinner before her bedtime at 10pm.

Sontaire is one of only two people who wear light green regalia, the other being Orinthal. She carries around the shop key, a randomly chosen book, and a considerable amount of gold. She knows the standard leveled Healer spells.

If you are male, she will be overly flirtatious and seductive: "Hmmm... how do you do? I'd say, very well from the look of things. I'm Sontaire, spend one night with me and I'll remind you why they say 'love hurts'." On subsequent meetings, she will say: "So, how'd you like to get together later and leaf through my octavo?" If you are female, she will say: "New around here? Well, we can start off by getting one thing straight. The men around here are mine. You want fresh pickings, go out and scrounge up some leftovers in a settlement or something." Approach her again and she will warn you: "I don't like competition. Just stay away from the menfolk, and we'll get along just fine." In both cases, however, she will finish conversation with the words: "Gotta go, got things to see and people to do."

The only bookstore in the Isles is a popular conversation topic; when asked for rumors or during private conversations, the residents will say: "Books of Bliss has quite a selection." and "If it's books you're looking for, it's the only place to go." However, the lustful owner has built up quite a bit of reputation herself: "Sontaire may sell a lot of books, but that's not why the men visit her." to which others will respond: "I've heard rumors about her." Halion also wrote a couple of poems based on the store and its owner: "If you're hungry to read a lustful story, find Sontaire at Books of Bliss and check her inventory." and "They say books aren't all Sontaire will sell, but I'm not one to kiss and tell."

At different stages in the Main Quest, Sontaire will share different rumors with other NPCs: