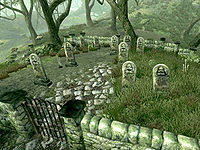 When you first arrive in the Shivering Isles there are already eight graves for non-characters in place (denoted below by not having a link). As you complete quests or "unlawful" activities, those who die gain a tombstone with a custom epitaph in the Graveyard. More tombstones are to be found at Vitharn.

This serves as a list of all the citizens (capable of dying) and their accompanying personalized lines to remember them by: