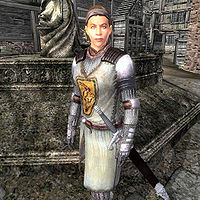 Viera has a very busy life as a captain of the guard. She sleeps in the Bravil Castle Barracks between midnight and 6am. She has two meals a day in the barracks: one at midday lasting two hours, and a second at 7pm lasting three. While on duty she has five potential areas to patrol. Every two hours she will choose one at random.

During her scant free time she will wander the barracks, although her schedule should always keep her quite busy. If you aid County Bravil during the Allies for Bruma quest, she will be sent to Bruma to help defend against potential Daedric attacks. She will set up her tent in the Castle Courtyard, and will sleep in it from midnight to 6am. The rest of the day she wanders the guard encampment, chatting with any fellow soldiers who are recruited. During the Defense of Bruma she will take part in the battle. Should she survive she will applaud the player when the Great Gate is closed, although a bug caused by her involvement in the quests will mean she can never return to her previous life in Bravil.

As guard captain of Bravil, she's armed with a silver longsword, and wears the Bravil cuirass, along with chainmail greaves, chainmail boots and chainmail gauntlets. She carries a small amount of gold and keys to Castle Bravil interior and exterior. She has one leveled Illusion spell, which is either an Invisibility, Chameleon or Silence spell.

When you approach her, she will politely introduce herself: "I'm Viera Lerus, captain of the Bravil Guard." When asked about Bravil, she is reserved, at least until you raise her disposition accordingly. She will then tell you about how hard it is to keep up working for such an irresponsible Count: "The Count used to be a great man, but power and idleness have spoilt him. However, we remain loyal in memory of past kindnesses, and to serve Bravil."

During Allies for Bruma, after you've completed the Bravil part of the quest, she will greet you with: "I look forward to fighting these daedra side by side with the Hero of Kvatch." If she survived the battle, she will then greet you with: "Hail, daedra-slayer!"