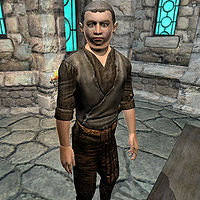 Jiv Hiriel is an Imperial bard who lives in Hackdirt. Jiv is having second thoughts about the local cult's methods, and is willing to help you in the quest A Shadow Over Hackdirt.

Like his fellow townsfolk, albeit reluctantly, Jiv spends most of his time wandering around the burned down village, scouting for strangers that might interfere with the cultists’ evil scheme. And like them, he spends the entire night, from 1am to 6am, in the Hackdirt Caverns worshipping the Deep Ones with the mysterious Brethren. After surfacing, he will wander around the village all day long, only interrupted by a one-hour visit at Moslin's Dry Goods at 12pm. At 5pm he returns to his cabin and relaxes for three hours before going to the Chapel of the Brethren at 8pm. Here, he will witness Etira Moslin recite passages from the Bible of the Deep Ones until it is time to enter the caverns again at 1am. The exception to this schedule happens when you accept to meet him at his house after dark. After arriving back at his house at 5pm, he will patiently wait for you all evening and not resume his normal schedule before 1am. If you enter the house and talk with him, he will resume his regular routine right after the conversation is finished.

Like the other cultists, Jiv is armed with an iron mace. He wears a typical lower-class outfit consisting of a coarse linen shirt with huntsman leather pants and matching moccasins. His only possession is a small amount of gold. Jiv also knows a leveled set of bard spells.

When first encountered and asked about Hackdirt, he will take you for another stranger and try and scare you away: "We don’t look kindly on strangers asking questions. If you need a room, try Moslin’s Inn. Otherwise, you’d best be moving on." However, if you ask him about Dar-Ma, Jiv will nervously tell you: "Shh. We can't talk here. They'll get suspicious. The girl is in danger. Meet me tonight after dark in my house. I'll leave the door unlocked. Don't be late." When you enter his house later on, he will greet you by saying: "You came. Good. I don't have much time. I have to get to the Gathering before I'm missed" but still has time to answer questions on several topics. When asked about Dar-Ma, he will provide plenty of information: "You have to believe me, I didn't know what they were planning. They want to bring back the Deep Ones. I thought I did, too, but ... she's so innocent. They've got her down in the caverns. They're going to sacrifice her, you understand? You've got to save her! Here, take this key. It'll open any of the trapdoors down to the caves. Every house in town has one. The one in Moslin's Inn is your best bet. Nearest where she's being held. The middle of the night, when everyone's at the Gathering. Good luck. You will save her won't you? I gotta go now."

Asking about Hackdirt will gain you information about the town's bloody background: "I was only a boy when the soldiers came. We hid, vowed revenge. But the Deep Ones never came back. Etira, she's the one that found them old books. Learned the runes, how to speak to them again. But they want blood, she says, or they'll not help us." He will then tell you more about the mysterious "Deep Ones": "I don't know much. Never seen them myself. Our grandfathers first found them, I think, digging in the mines. They helped us. Made us rich. But there was a terrible price. Blood -- and worse." and also about the caverns: "Caves run all beneath the town. Some natural, some dug over the years since we found the Deep Ones. Every house has an entrance now." Asked about the Brethren, Jiv issues a warning: "Those of us who've changed the most, we call The Brethren. Live down in the caves, to be nearer the Deep Ones. They don't like the sunlight much. Dangerous, too. You'll want to avoid them if you can help it."