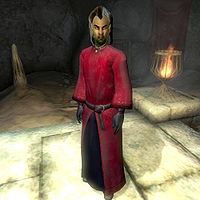 Harrow, a Dunmer Mythic Dawn agent, is the Warden of the Shrine of Dagon, which lies deep in the Lake Arrius Caverns. If you choose to join the Mythic Dawn cult in order to gain access to Dagon's Shrine, Harrow will be your sponsor, taking possession of almost your entire inventory, leaving only quest items.

He wears the Mythic Dawn robes and carries the antechamber key alongside a small sum of gold. In combat he relies upon his summoned Mythic Dawn armor and mace, as well as a targeted shock spell and summonable creatures.

After you have talked to the Doorkeeper, Harrow will meet you in the northern tunnel of the Caverns and will explain the situation: "I am Harrow, Warden of the Shrine of Dagon. By following the Path of Dawn hidden in the writings of the Master, Mankar Camoran, you have earned a place among the Chosen. You have arrived at an opportune time. You may have the honor to be initiated into the Order by the Master himself. As a member of the Order of the Mythic Dawn, everything you need will be provided for you from the Master's bounty. Give me your possessions, and put on this initiate's robe." If you choose to hand over your possessions he will say: "Very good. Follow me. I will take you to the Shrine." If you choose to keep your possessions, he will be surprised but will give you a second chance: "What? I must warn you, no one leaves this place who does not bind himself to the service of Lord Dagon. But I am sure you will reconsider. You have proven yourself worthy and dedicated to have come this far. I ask you one last time: give me your possessions. The Master requires it of all initiates." If you once again deny his request, he will attack you with the words: "Then you have come here to die."