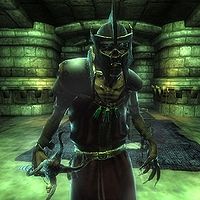 Erandur-Vangaril is a lich combining the souls of two former members of the Mages Guild: the necromancer Erandur and the spellsword Vangaril.

A Weathered Journal found outside Lost Boy Cavern reveals that Erandur was once a necromancer who, following his expulsion from the Guild, fell under the influence of Mannimarco and eventually became a lich in his service.

Erandur's fate was discovered by his friend Vangaril who tried to engage the assistance of the Mages Guild in an attempt to reverse the process. The appeal failed and Vangaril attempted the task alone.

A series of notes found in the cavern indicate that the rescue attempt failed and that the lich managed to ensnare Vangaril's soul.