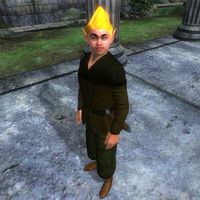 The Adoring Fan is a Bosmer commoner who becomes your "groupie" once you have achieved the rank of Grand Champion in the Arena. He will only appear once you have left the Bloodworks after accepting the Raiment of Valor.

As soon as you exit the building, he will approach you and offers to shadow you in your travels: "Wow! You're the Grand Champion! I saw your fight against the Gray Prince! You're the best! Can I... Can I follow you around? I won't get in the way!"

If you accept, he will say: "Golly, you're the best! I'm going to follow you and watch you and worship the ground you walk on! Let's go!" He will then become a standard follower, although he tends to flee in the face of peril rather than help you (unless hit with a Rally spell). If you decline his offer or send him back to the Arena, he will be found wandering around, hopefully awaiting your return. On subsequent greetings he will say: "Yes, oh great and mighty Grand Champion? Is there something you need? Can I carry your weapon? Shine your boots? Backrub, perhaps?".

He wears a dark green shirt, green felt linens, and a pair of huntsman moccasins. He is armed with a steel dagger, but will almost never use it. He also carries a torch, which he will use whenever it gets dark, and two or three gold coins.

"Here? Right here? What about, say... over there? No? Right here? All right then, you're the Grand Champion! Whatever you say!"

"Aw gee! You sure? Okay, well, I'll be hanging around the Arena grounds if you need someone to worship the ground you walk on. Bye!"

If you come close to him, he will say: