Rumors of a Vampire

There is a rumor in Bruma about Raynil Dralas, who claims that he is a vampire hunter. You also learn that he has already killed an alleged vampire in town, a villager named Bradon Lirrian. 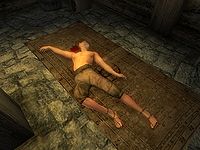 Damning evidence, or part of a cover-up?

Head to Lirrians' house, which is located just behind the right side of the Chapel of Talos. Inside you will find two guards and Lirrians' wife. After some persuasion (minimum disposition 70), the investigator, Carius Runellius, will tell you that several bodies with bite marks in their necks were found recently. Luckily, a Dunmer vampire hunter, Raynil Dralas, turned up and found the vampire, who turned out to be Bradon Lirrian. The guards investigated his claim, and it seems the villagers have only seen Bradon out at night. Furthermore, a Murdered Beggar was discovered in the basement of his house. After you talk to Carius, a conversation with the widow, Erline Lirrian, reveals that Bradon had to work during the night, which explains why he had to sleep during the day. She also believes that the body was intentionally placed in the basement to frame her husband. Erline implores you to clear his good name.

Speak to the townsfolk again, and they will tell you that Dralas is staying at Olav's Tap and Tack. Speaking with Olav will provide additional information. With a little persuasion, Olav tells you that he knew Bradon and had actually seen him during the daytime, thus lending credence to the fact that he was not a vampire. He then gives you the key to Dralas' room in the hopes you will find something to clear Bradon's name. Alternatively, you can pickpocket the key off of him.

In the room, you find a diary called Gelebourne's Journal behind a chest of drawers, which details how Bradon, Raynil, and a man named Gelebourne were part of an adventuring group. It gives their account of how they explored some ruins and found a magical amulet which they then hid in a cave near Bruma. It becomes obvious that Raynil has been killing off his partners in order to keep the treasure for himself. Take the diary so you can give it to Carius as evidence of Bradon's innocence. 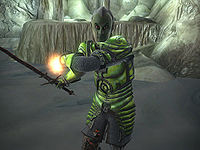 Return to Lirrian's house and speak with Carius. He will accept your evidence and tell you to meet him at the Olav's Tap and Tack in one hour, after he talks to the guards about apprehending Dralas. When you meet him again, Carius will tell you that he had Dralas followed. The "vampire hunter" was seen heading west, towards Boreal Stone Cave, which seems to match the description of the cave the amulet was hidden in. Carius then asks you to catch Dralas, stating that you have but one day to do so. He'll mark the location on your map. Travel to the cave quickly, and inside you'll find Raynil, who will refuse to surrender. Dispense justice upon him, take the three keys from his corpse, and recover the artifact, a Mundane Amulet, from the "waterlogged chest" nearby. There are also some other chests nearby and very little else in this cave.

Return to Bruma and speak with Erline to have the mundane amulet's true nature revealed. She tells you that Bradon cast a spell on the amulet to prevent the other two members of the brotherhood from gaining its power should they betray him, because he did not trust them. He told Erline that she should only tell them how to lift the spell if she is on her deathbed, and he is already dead. The events of this quest show that his distrust of Raynil, at least, was justified. Ironically, Erline demonstrates that the spell is lifted by a secret word: "Brotherhood". The mundane amulet is revealed to be the leveled amulet Phylactery of Litheness which fortifies your speed. It is your reward.

Unlike other quests, you actually have a time limit in this quest. If you do not go to the cave within 24 hours after Carius tells you to go there, Raynil will escape to Morrowind and you'll receive no reward.