Athyn Sarethi in his manor in Ald'ruhn will ask you to deal with a former Redoran Noble, Arethan Mandas, who has gone mad. Arethan is in a cave known as Milk and is harassing travellers by demanding tribute. Milk is found a bit to the west of Ald'ruhn. Athyn Sarethi wants this matter solved, but he doesn't want his old friend killed if it can be avoided. He suggests talking to Arethan's father, Llerar Mandas, in Ebonheart.

You can visit Arethan Mandas anytime. He is not hostile, but you have to get past his hostile guards. Arethan will talk to you, but all you will get is some mad talk. He mentions Delyna and Tel Fyr.

The simplest and quickest method is to just kill Arethan, though there is another solution. Sarethi mentions that Arethan's father, Llerar Mandas, can be found in the Grand Council Chambers in Ebonheart, and that you might want to talk to him before traveling to Milk. Llerar will tell you that his son went mad after Divayth Fyr kidnapped Arethan's daughter, Delyna, and believes that the return of Delyna just might cure Arethan's madness. 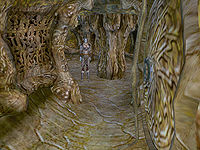 Tel Fyr is located a small distance southwest of Sadrith Mora. There are no travel services, so swimming is required. Delyna Mandas can be found in the Onix Hall of Tel Fyr, behind a trapped 60 pts locked door. The door can be opened with Divayth's 1008th Key, or alternatively you can pick the lock or cast an Open spell. Nobody in Tel Fyr seems to care if you rescue her, Divaith himself cannot be concerned with such petty matters. Escort Delyna outside. Once there, she will give you an amulet which you can show to Arethan as proof that she is alive.

Travel to Milk and show Arethan the amulet and he will become slightly more sane and promise to stop demanding tribute. His guards will become friendly, if you haven't disposed of them on your way in. Report back to Sarethi in Ald'ruhn to complete the quest and receive a noticeable increase in disposition with all Redoran members. If you tell Llerar Mandas in Ebonheart the good news you receive an Ebony Closed Helm as well.

These Codes can be used along with the Journal Console Command and Quest ID given within the chart to update the quest to a certain point.

These Codes can be used along with the Journal Console Command and Quest ID given within the chart to update the quest to a certain point.