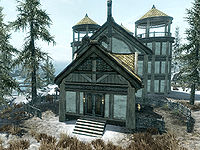 Windstad Manor is a piece of property in Hjaalmarch, north of Ustengrav and east of the Abandoned Shack. It is one of three potential homes available with the Hearthfire add-on. 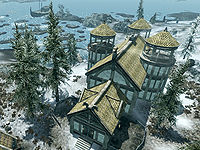 Aerial view of the house with the Alchemy, Enchanting, and Library additions

After installing Hearthfire, you may purchase this plot of land at Highmoon Hall in Morthal. If Idgrod Ravencrone is still the jarl, speak with her steward, Aslfur; if the Stormcloaks have control of the hold, speak with the new jarl, Sorli the Builder or her husband Pactur. You will have to complete the quest Laid to Rest before being allowed to purchase land if Idgrod is still jarl; Sorli will allow you to purchase it out of gratitude for your help installing her, whether that was because of Season Unending or conquering Hjaalmarch for the Stormcloaks. When you ask if you can buy a house in the hold, you will be told that there are no houses for sale at that time, but a new plot of land is available. It will cost 5,000 gold.

Your new property, Windstad Manor, will be marked as an undiscovered location on your map, located in the northern part of Hjaalmarch on a small hill, south of High Gate Ruins and just east of where the land lowers into the Sea of Ghosts.

When you arrive on your new plot of land, you will find a drafting table, carpenter's bench, anvil, and chest south of the housebuilding area, just before the treeline. A "Log Pile" can be found slightly north of the drafting table. A clay deposit is directly adjacent to the north end of the log pile, while a stone quarry is a short distance further north, embedded in the cliff wall on the east side just before two snow-laden trees. Directly west from this point, towards the water, is a second clay deposit; another stone quarry is in the cliff wall just behind it.

You can begin building your home immediately, with materials provided in the chest when you first arrive. A unique feature at Windstad Manor is you have the option to build a fish hatchery. Once built, the hatchery appears a distance north of your property, next to the second clay deposit previously mentioned. If you place any fish or fish eggs (Slaughterfish Eggs or Salmon Roe) in the column at the end of the jetty (only one of each species will be accepted) and return to your property in seven days, the netted area of water will contain several offspring of that fish. The Slaughterfish that spawn are tame and will not attack you. The house entrance will face to the south; looking west from there affords an impressive view of Solitude atop its natural arch.

Like the other player-built homes, you will have the option to expand onto your home with a Main Hall, cellar, and three wing additions. See this page for pages detailing the furnishing options in each part of your home.

Should you become a Thane of Hjaalmarch, Valdimar will become your housecarl. He will move to Windstad Manor upon construction of the small house layout.

Multiple types of fish may be added at the same time to the hatchery and all will eventually mature. The following can be raised in the hatchery:

The Nordic barnacle cluster and pearl oystersDB cannot be bred in the fishery, though they are aquatic creatures. Dragonflies may appear above the water in the fishery as well.