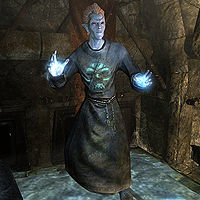 Vals Veran is a Dunmer conjurer who believes the dead are there to serve the living. He is discovered by Golldir defiling Hillgrund's Tomb with his 'filthy dark elf necromancy'. After learning that Vals Veran was attempting to resurrect Hillgrund and their other ancestors, Aunt Agna went in alone to try and stop him.

When you and Golldir confront him, he will have a short conversation with your companion and then attack:

Vals: "The dead should be made to serve the living, not the other way around!"
Golldir: "I'll return my ancestors to Sovngarde, and you with them!"
Vals: "Sovngarde is a myth, you s'wit! And now you can join your ancestors in service to me!"

Vals wears Necromancer robes along with a pair of boots.