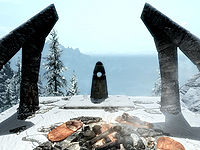 The Lord Stone is one of the thirteen Standing Stones scattered across Skyrim. 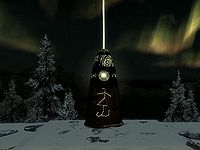 The Lord Stone, when activated

The Lord Stone is located on top of a stone base with the remains of a large arch on either side of it. It can be reached by following the path that leads past the Shrine of Mehrunes Dagon. The path starts to the west of the Hall of the Vigilant. There are several piles of rocks marking the route; some have the remnants of banners hanging from them and flapping in the wind. You'll pass Dimhollow CryptDG along the path; once you reach a long flight of stone steps cut into the mountain leading up to the Shrine of Mehrunes Dagon, turn to face northeast. You'll see the Lord Stone a short distance up a hill.

The Lord Stone is home to a group of three bandits, at least one of which is an archer. There are three unowned bed rolls arranged around a small campfire in front of the standing stone. There is also a corundum ore vein at the southwest corner of the base of the structure upon which the stone is set. The path near the shrine is home to a leveled animal, typically a frost troll.