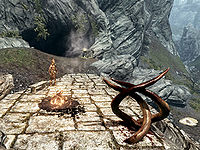 The entrance to the Karthspire

The Karthspire is a cavern buried in the Karthspire mountain at the southern end of the Karth River valley. It is occupied by Forsworn, who have also made camp outside. There is only one zone, but it is clearly split into the Forsworn occupied camp, and the booby-trapped puzzles that lead to Sky Haven Temple, which can only be accessed once you have started the related quest.

If you fast travel to Sky Haven Temple after discovering it, you will land inside this cave, in front of the blood seal and door to the temple.

Outside the cave is a Forsworn camp, for see here for full details. 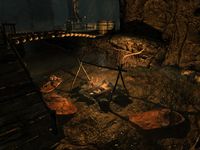 Upon entering you are in a natural cave with a camp fire in front of you and a wooden ramp to the left of the fire, which leads up to the main living area. Beside the camp fire is a sleeping Forsworn guard and three bed rolls, behind these is an iron ore vein. Following the ramp up you will pass on your left a dresser with a potion of ultimate stamina and two random fear poisons. There are many food barrels around the cave, including two in the southeast corner, one of has three gold coins on top. To the left of these barrels is a table and chair with a small mead barrel and a fillet of salmon meat on top. There are two narrow wooden bridges across a small gap and between these is a small table and chair, a Forsworn guard is sat here.

Crossing one of the bridges you will encounter the Forsworn Briarheart. There is a table next to a stone pillar holding a random potion, a thistle branch, a bowl of void salts, a bowl of frost salts and a wooden plate containing a rock warbler egg and canis root. There is a barrel next to the table with a lit lantern on top. There are three further bed rolls next to the north wall. In the southwestern corner is an unowned double bed, an unlocked chest and small table.

The wooden planking continues to the west and then turns to the north, then continues until you reach a table holding a leather strip. It then turns back to the west. The tunnel opens out into a large open roofed cavern. There are stairs on your right against the northeastern wall. On the wall, just before the stairs start is a second iron ore vein. On the other side of the stairs is a juniper tree. Passing between two parts of a stone bridge structure, further back into the cavern, on the ground level is a tree stump with a mora tapinella growing on it. 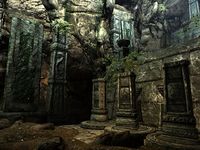 At the top of the stairs are three rotatable pillars with unusual symbols on. Unless you are here as part of the Alduin's Wall quest, or have already completed it this is as far as you can go.

During this quest you unlock the stone bridge and cause it to drop into place allowing further progress to be made. There is a second juniper tree on the far side of the bridge and stairs leading south into a tunnel. The tunnel turns to the west again and open into a room full of pressure plate tiles on the floor. Follow the correct symbols to the pull chain that deactivates the traps and drops a second bridge over the previous large open roofed cavern, heading north. As you cross the second stone bridge there is another juniper tree on your right on a lower ledge only accessible by dropping down onto it. There is nothing else of interest there. Continue to follow the path into another tunnel that turns to the west and up some more steps. It then turns south again and you are now at the highest level within the large open roofed cavern. The path forward heads west and opens out into a large stone chamber with an unlocked chest in the middle and a quicksilver ore vein. This is the entrance to Sky Haven Temple. You need to activate the blood seal to gain entrance.