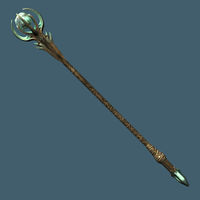 The Staff of Magnus is a unique item in its appearance and functions similarly to the staves of flames, frost, and sparks, which all feature a constant firing when used until their charge is depleted.

When fired, the Staff of Magnus emits a stream of energy that has a significantly larger range than other forms of concentration spells (i.e. Flames, Sparks, Frostbite), excluding the master-level Destruction spell Lightning Storm.

The staff has an unusually large charge capacity and features a unique effect of draining 20 points of magicka per second from its target and will start draining health instead if the target has no magicka, so it is particularly useful against high level mages like Master Necromancers.

The staff appears to be a greenish blue orb surrounded by several spikes with a green-blue gem at the bottom.

The staff itself can be found within Labyrinthian, but the section that it resides in is only accessible if you have the Torc of Labyrinthian from starting the quest The Staff of Magnus, one of the later quests from the College of Winterhold.

The staff is carried by the dragon priest Morokei, and can be looted from his corpse once he's dead.