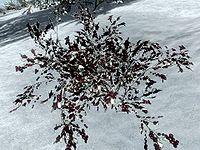 Snowberries are harvested from the snowberry plant, which is commonly found near the snowline. Snowberries are the only ingredient which has all three resist elemental effects: fire, frost and shock.

142 guaranteed samples can be found in 66 different locations. Locations with the greatest numbers are:

It is categorized as a common ingredient, meaning that all apothecary merchants have a 36% chance of carrying 1-5 samples. In addition, it may be randomly found in some barrels and in apothecary's satchels.

1578 snowberry plants are found in 208 different locations. Locations with the greatest numbers are: