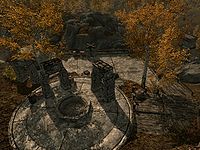 The Ruins of Bthalft are Dwemer ruins located south of Ivarstead. They are found to the east of Rift Imperial Camp. Three bandits call this place home.

This location is used by bandits as their base camp. Due to their proximity to the Rift Imperial Camp they can often engage each other. There are arches at both the northern and southern ends of the camp with a couple of bone chimes hanging down. Between the arches is a stone floored area with several crates, barrels, and sacks lying around. A third arch to the southeast leads up to the statue containing the machinery to gain access to the Aetherium Forge. Near the northern end are wooden stairs leading up to an adept-locked wooden chest, along with some crates, a barrel containing ingredients, and a food sack. There is a Dwemer Convector, used for Arniel's Endeavor, which is found behind the wall, to the north between the two arches.

With Dawnguard installed, a tower can be raised after finding all four Aetherium Shards during Lost to the Ages. It gives access to the Aetherium Forge.