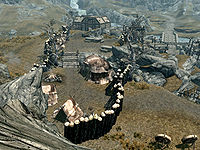 Robber's Gorge is a bandit camp spanning the road from Rorikstead to Dragon Bridge.

While the most direct path is through the road way entrance and in through the camp gate, a covert approach from the southwestern side will allow access to the camp and permit an archer to hit the guard sentries controlling the trap levers from the overpass bridge.

There are no enemies in this zone. Immediately in front of the player on the table sits the Bandit Leader's Journal. There seems to be leveled loot near the table.

The Bandit Leader's Journal in the Cove recounts the Bandit Chief's mutinous strife with his crew, and his plans of stashing away gold, eventually accruing enough to run away before he is murdered by his own people. He writes that he has moved his stash, hiding it on "the island to the south, by the old tree stump." The player can proceed out of the cove exit to the south and head directly south towards the waterfall; the chest will indeed be there on the south side of the aforementioned tree stump. The chest is locked (Master-level) but can be unlocked with the Robber's Cove Key.

The following ingredients can be found in Robber's Cove: