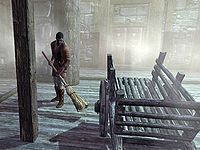 The East Empire Company is a huge organization that originated in Vvardenfell and later set up operations in Skyrim: a warehouse in Solitude and an official office in Windhelm. The warehouse near Solitude is off limits, but talking to the guard outside will provide some information on the problems the Company is experiencing. The guard will then point you towards the Windhelm office, specifically an Imperial named Orthus Endario who works there.

Travel to the Windhelm dockside office; it will be unlocked between 4am and 8pm, so enter the office and take a look around. The place is falling apart, the shelves are empty, and cobwebs cover most of the ceilings. Orthus will be inside, either trying to clean the place up or eating, and will immediately apologize for the horrible state of the place. When asked, he will explain that pirate attacks have managed to stop all shipments to the Company, from Hammerfell to Vvardenfell, and that the Shatter-Shield clan are the only ones who receive shipments. Apparently, the Shatter-Shields run a private shipping operation, and would be more than pleased with a monopoly on shipments from foreign countries. Orthus has no proof against the clan, but will point you towards a Dark Elf named Suvaris Atheron who works in the Shatter-Shield Office next door. He then hints at Suvaris’ logbook, which could contain evidence that the clan is acquainted with the pirates. The quest will now start and you will have to break into the office and steal the logbook.

Breaking into the Shatter-Shield Office is not overly difficult. At 8pm, Suvaris Atheron leaves the office to go drink and sleep at New Gnisis Cornerclub until 8am. You can then pick the lock and enter unnoticed. If you're not comfortable with picking Expert locks, you can pickpocket the key from Suvaris. Another strategy is to simply enter the office during the day, while Suvaris is there and the door is unlocked. She is not exactly unwelcoming to visitors, nor does she make much of an effort at guarding her logbook, so wait until she sits down at the table near the front door, then claim the logbook from the table in the northwestern alcove. Leave the office and return to Orthus.

When you hand over the logbook, Orthus will read through it and discover that Suvaris often traveled to Dawnstar to meet up with a bunch of pirates, led by captain Stig Salt-Plank. He will also explain more on the pirates and reveal them as the Blood Horkers, a clever bunch not to be trifled with. He suspects the pirates can be found at the local inn, so travel to Dawnstar and enter the Windpeak Inn. 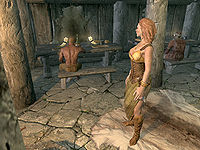 "You beasts are the worst."

Inside the Inn, you will find Stig Salt-Plank boozing it up with his Blood Horker companions Alding, Gjuk, and Irlof. They are obviously unwelcome and seemingly unpleasant towards the tavern’s bard, Karita:

Karita: "You beasts are the worst."
Stig: "Come now, dearie, surely we aren't all that bad."
Karita: "Just... leave me alone! I've brought your mead, now drink it and shut your filthy mouths."
Alding: "Oh, we've got other things in mind for our mouths, sweetie."

Locate Stig Salt-Plank and ask him if he knows about the Blood Horkers. He will laugh in your face and admit he’d been captaining them for nine years, then proceed to ask why you are so interested. Pretend to be interested in the ship plundering business and Stig will tell you about someone named Haldyn, referring to him as their ‘secret ingredient’, as he is a powerful battlemage and functions as the leader of the Blood Horkers. Keep pretending to be interested in joining the Horkers and Stig will get suspicious; you can choose to bribe him or challenge him to a brawl. Both options will lead to him telling you about the hiding place of Haldyn, a place called Japhet's Folly.

Alternatively, you can pickpocket Stig's note that mentions both Haldyn and Japhet's Folly, or kill him and take it off his corpse. Attacking or killing Stig will not result in a bounty, or even retaliation by his crew; the player may kill all the pirates with no penalty. 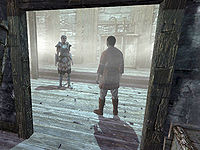 When you return to the Windhelm docks, a new ship has arrived and will be docked right outside the East Empire Company office. Inside, you will find that Orthus has received a visit from a company superior, namely Adelaisa Vendicci, who will be understandably upset with the state of the place and the lack of effort on Orthus’ part:

Orthus: "Adelaisa, I'm sorry."
Adelaisa: "Sorry isn't good enough, Orthus. There's a lot of gold at stake here, and sniveling isn't going to get it back."
Orthus: "I've got a top man/woman on the job right now. He/She should be returning any moment."
Adelaisa: "This must be him/her, then."

If you talk to Orthus, he will briefly introduce Adelaisa and point you towards her; when you approach, she will be grateful to finally see someone who can get things done and order you to join her on her mission to stop the Blood Horkers once and for all. When you reveal the name Haldyn to her, she realizes the danger of the mission and will immediately exit the office. Head outside to the docked ship and talk to the East Empire mercenary and agree to tag along on the journey to Japhet's Folly, an isolated island on the very northern border of Skyrim. During the trip, a strange fog forces the ship to drop anchor outside the island, and Adelaisa suspects Haldyn to be responsible for the sudden change in weather. With all her mercenaries too scared of Haldyn to react, Adelaisa will ask you to take out the battlemage, thus making the fog disappear. This should clear the way for the ship and an attack can be launched. You will have no choice but to accept, so jump off the railing and use the many blocks of ice as a path to Japhet’s Folly. Follow the map marker to the hidden sea cave and enter. 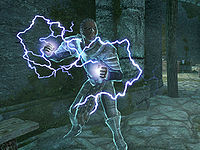 The Sea Cave is a small cave located underneath the folly, inhabited by two to three mudcrabs and a single Blood Horker. Dispose of them all and claim a few healing potions from the shelves, as well as some minor loot from the chests. Proceed up the western slope to a door, leading to Japhet Folly’s Tower. As you enter you will hear the sound of more pirates from the level above, so climb the stairs carefully and beware of the pressure plate and the corresponding spike wall along the way. Dispose of the enemies, and open the door to a hallway with a chest and locked door that is your escape route later on. Leave it for now and move on to the next room where you can choose to head either upstairs or downstairs. Proceed downstairs first, where two Horkers await. The remains of Japhet can be found behind a locked door next to a locked boss-leveled chest and an explanatory journal. Backtrack and make your way upwards the tower. Pick up a couple potions, several alchemy ingredients including two briar hearts and a rare sample of small antlers from a table on the way. When you reach the top, Haldyn will be there and immediately attack you, showering you with shock spells. Dispose of him and loot his body for the Japhet's Folly key, then claim the treasure from his chest. Backtrack all the way down the stairs to the locked door and unlock it using the key. (The hallway you came in from will be caved in, so you can't go back that way. Also, there's no door back to the Sea Cave, so this is your only choice.) 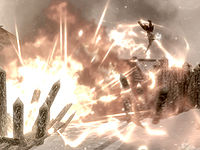 Rise in the East

Once outside, you will find yourself in the middle of a regular battlefield as Haldyn’s death obviously removed the bad weather surrounding the island. As a result, the East Empire Company mercenaries tear the area to pieces with bombs. The many explosions will not hurt you, but you will have to dispose of all the Blood Horkers that attack you as you make your way towards Adaleisa, who will be waiting on the docks at the bottom of the mountain. When all is said and done, talk to her and she will congratulate you on a job well done and tell you to say the word when you want to return to the mainland.

Back in the East Empire Company, Orthus Endario will be overwhelmed with joy and hand you a leveled amount of gold for your trouble. He even suspects the bossy Adelaisa will go easier on him from now on and tells you to return to the office if you ever need help; this means that you can ask Adelaisa to be your follower should you ever need her assistance. Additionally, after a few days, the office will be restored to its former glory and you can take almost all the items there for free.