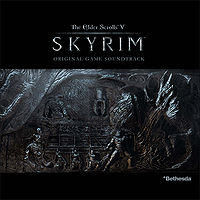 Cover art of the Skyrim soundtrack

Skyrim's music was composed by Jeremy Soule, who also composed the music for both Oblivion and Morrowind.

The complete in-game music is almost 4 hours in length.

The soundtrack can be purchased from DirectSong and iTunes.

Dragonborn uses many tracks directly from Morrowind's soundtrack, but it adds several new tracks too.

Skyrim's soundtrack was nominated by the British Academy of Film & Television Arts for Best Score in the Game Music Category, but was beaten by L.A. Noire. It was also nominated by Game Audio Network Guild for Music of the Year and Best Original Soundtrack Album, but again lost. The main theme, Dragonborn, won the Game Audio Network Guild's Best Original Vocal (Choral) award.

Although most of the music is new, a few motifs from Morrowind and Oblivion make a recurring appearance:

Composer Jeremy Soule has shared his inspirations and background information about some of the tracks on the soundtrack. As some of the comments are long, they are hidden in show/hide tags.

From Past to Present

From Past to Present - this composition represented a new approach for me in my writing in that I was wanting to create a "living" piece of music. It is music that doesn't owe anything to a creator, it just exists. And somehow, in some abstract fashion, it has always existed. I find that this is the most challenging but specific goal that I now have as a composer. But this creative goal isn't unique to me, nor is it something that I invented. Incredible works such as Debussy's Claire de Lune show me just how much more I can strive for in this very mysterious quality of "living" music.[1]

Hammered dulcimer? No, actually it's prepared piano. I used pencils to strike the strings.[2]

The White River - featuring solo French horn and lyrical trumpet. All of which, were performed by yours truly. Using a digital technique called "breath control", I'm able to use these virtual instruments in a manner that is similar to their acoustic counterparts. [3]

For me, music is a literal language. And like some "multilingual" persons, it is sometimes difficult for me to clearly express what is going on in my head. To illustrate my process, I sometimes speak in English as my music is being performed to describe, in real-time, what each phrase is communicating. It is a neat party trick. Some composers are shy or indignant about disclosing their back-processes. I'm not. And, I wish more composers would speak more about their creative process. That said, I don't want to seem self-indulgent with an arduously long post. But, for those that are interested, I want to provide a window into the intense factoring that goes on each and every time I create music. So why am I doing all of this when I make music? I want to always move the player forward. And with Skyrim, I also wanted to instill a sense of purpose in the environment in spite of the various adversaries or intimidating landscapes--all frequently seen in the game.

This composition was challenging despite the slow tempo and monolithic movements. My multi-layered approach was to embolden the player with a narrative. This was accomplished through a specific structure. The first part of my structure/device was the acknowledgement of adversity. The second was to provide an enlightened incentive to overcome the adversity, and the third part of my construct was to provide a sense of scale of the world to create relevance for the entire idiom (the frame of the painting). Overall, I wanted the theme of the narrative to be about a dark hope and an illustration of an almost unsaid acknowledgement of a repressed truth. This narrative also starts with a metaphor. In this metaphor, I presented what I call the "walker" (or soul) whose footsteps are represented in plodding half notes. The next cast members of this metaphor include nature, light, darkness and death itself (adversity).

Representing adversity, the male voices in plodding half notes bring a cold and icy reality which reveals a lumbering walk to the end of a life. (0:00 - 0:48) Death is the truest adversity in literature. Yet, this death pattern becomes lifted from these darkened voices to be transfigured and answered as a voice of the natural world... in this case, the violins. As nature lifts the countenance of this "death walk", light (in female voices) begins to pour onto the path of the walker. (0:49 - 1:19) A placid texture of nature (1:21) brings a calm setting before a baritone soloist (1:52) introduces a concept of spiritual redemption (the incentive) and a pronouncement of a greater truth. His texture also represents the purest form of bravery as he is both cautious and meek (again, the incentive). His message is affirmed as truth by the light of nature (2:24) represented in the female voices.

But at 2:37 these women's voices sing something more urgent and pleading. I wanted their message to be an intercession for life and a balance to the darkness heard at the beginning of the work. The phrase delivery is of an intense and painful love... or something almost beyond love. It is almost that they are saying "hurry for the sake of your eternal joy". Yet there is a knowing balance here that leaves room for the individual to determine their own fate. The strings of "nature" at 3:19 are meant to create a sense of opening arms and hands that are being dropped to either side as if to uplift the walker. Yet none of this is meant to provoke a decision on the part of the walker. As death is a balance of nature, the concept is reintroduced in the strings at 3:51 with a lament of life by the "light" and ultimate acceptance of the purpose of the darkness at 4:25. The new octaves faintly heard in the female voices represent a respectful acknowledgement of death at this point. At 5:12, in a sort of vignette of this world, the male and female voices combine to represent an illustration of the marriage of death and life (the sense of scale). Yet the message now is carried forth without an intended recipient (again, meant to illustrate scale through an impersonal delivery). The pleading of life dissipates into the natural world, but at 5:49, nature is alone. This also represents the "frame" of the composition.

Of course, none of what I've written above addresses the underlying musical theory elements and choices I've made out of sheer musicality concerns in performance. However, they are all linked. I hope some of this makes sense. Again, I simply wanted to provide a bit of a window into my process. And if you read this far... I applaud you. Good job! You're as crazy as I am.[4]

The solo instrument you'll hear in this piece is called a duduk. It's a rather interesting reed instrument.[5]

"Solitude" describes two points of reference... the first is of an accepted but somber reality and the other is of an ideal realm that was meant to be, but for whatever reason, was never realized. I find this juxtaposition to be a basis of good lore as it creates a question about the value of a dream vs. the practical reality of life. For those still reading this, the celli and harp bring the "reality" and the voices are the sound of what is "beyond". Fairly straightforward enough? Now, if you've suffered through reading this much text, I'll go on to say that you can hear in this music a sense of true love. Yet, the place of truest love is unattainable. Or is it? One thing is certain, I always infuse as much of my life experience as possible into my work. Who did I really think of when I wrote this...? Of course, it was my Immortal Beloved! Every composer has at least one.[6]

Sky Above, Voice Within:

Humility... Even when the textural scale is gigantic and there are 1000 digital musicians involved, the narration here is one of humility. This composition is about the coming to terms with a profound loss through the embrace of a larger principle. And even as life passes, the narrative of our lives lives onward. And in that light, we are forgiven.[7]

This disc was carefully constructed and took months to complete. In this recording, I'm working with various psychological and acoustical theory that utilize precision tunings to create a very special "atmosphere"... There are even mathematics in this music that reflect planetary and celestial physics. The journey of this music takes the walker to the lower lands, from where the journey will eventually ascend to the ceiling of the world. When you hear the winds at the end, you are in excess of 14,000 feet, and you are hearing this atmospheric pressure and common temperature. This was all processed in simulation software.[10]

In previous games the music was available as MP3 files in the main game directory, but for Skyrim the files have been included in Skyrim - Sounds.bsa, and encoded with a ".xwm" extension. Once extracted from the BSA, they can be played using MPC-HC (no playback issues) or the VideoLAN media player, which is also able to convert them to other formats, such as MP3.

The music can be converted to wav via xWMAEncode.exe found in the Microsoft DirectX Software Developer's Kit. The SDK is about 500MB compressed and requires installation, but the basic .exe is a standalone encoder/decoder, thus best found and used without the kit.

The Main Theme can be found in the "special" directory.