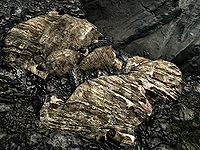 A vein of iron ore

Mining is an activity in Skyrim that involves extracting various ores from veins found in mines. The ore you obtain can be smelted into ingots, and then used to forge new weapons or armor. They can also be sold, which is most profitable if sold to one of the mine owners in the Mine Ore radiant quest.

Mining is done by activating an ore vein with a pickaxe in your inventory, or attacking an ore vein with an equipped pickaxe. In addition to standard pickaxes, Rocksplinter or the Notched Pickaxe can be used to mine ore. Ore veins are everywhere: all ore types can be mined from veins and then smelted at a forge to obtain ingots.

Veins typically yield three pieces of ore. Each piece of ore has a 10% chance of being accompanied by a random, level-dependent gem, as detailed on the Gems page. After being mined, the vein is depleted, although it will eventually respawn (see bugs).

Places identified on the map with a mine icon are all listed on the Mines page. However, veins are found in many other locations in Skyrim. Details on the best places to find each type of ore are provided on the individual ore pages:

Note that Steel and Dwarven ore do not exist: Dwarven Metal Ingots are obtained by smelting Dwemer metal, and Steel Ingots by smelting one Corundum Ore and one Iron Ore.