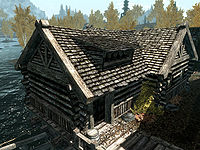 Honeyside is a two-story house in the northwest corner of Riften. 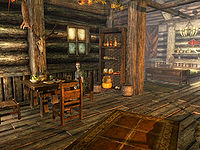 This house, the second-least expensive home that can be obtained, becomes available for purchase during a quest for the Jarl of Riften. The quest can be started at the Fishery outside Riften; look for an Argonian woman, Wujeeta, working inside the Fishery. However, you need not contact her at the Fishery to start the quest since she can be contacted outside work hours to initiate the quest as well.

Note that the Jarl will not even mention selling the house until you have completed the associated quests Helping Hand, The Raid and Supply and Demand, and also built a reputation with Riften citizens by doing a few miscellaneous quests for the people of the town (see I Done Got Thaned! for details). Honeyside must be purchased from her steward Anuriel in order to complete the quest and receive the title of Thane of Riften.

Alternatively, if you give Riften to the Empire during Season Unending or conquer it during Reunification of Skyrim, Honeyside can be purchased from Hemming Black-Briar without having to complete or begin the quests for the Jarl.

Honeyside is a small two-story house, with access from within Riften and from the docks just outside the city. The house comes with a basic kitchen, bedroom, basement with housecarl's quarters, and a dock. A housecarl, Iona, will be employed when you have become a Thane of Riften. The garden will regrow after spending 30 in-game days outside of Riften and all its buildings including Honeyside. 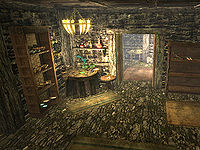